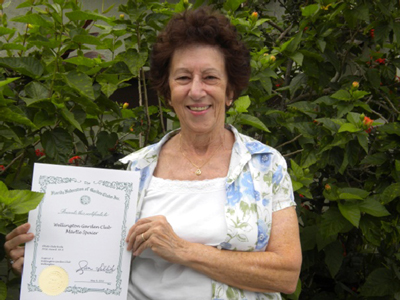 At the 2012 Florida Federation of Garden Clubs (FFGC) annual convention, Wellington Garden Club member and Royal Palm Beach resident Martie Spaier was presented the Photographic Slide Award for her digital photographs of birds in a natural setting by a non-professional photographer.

According to Spaier, she has “been taking photographs since I was a kid with a Brownie camera. I mostly concentrated on photographing people until I moved to Florida nine years ago. I was always interested in nature and wildlife, and after retirement, I had more time to devote to these interests.”

In addition to photographing in Florida, Spaier has taken extensive wildlife and floral pictures from many of other areas, including Alaska and Butchart Gardens on Vancouver Island. Spaier attributes her photographic talents to good genes inherited from her family of artists, including her father, who made sterling silver jewelry, her mother, who made stone sculptures, and two aunts, who were painters.

The FFGC contest rules required that the photos be taken in Florida. Spaier’s winning pictures were taken at Ding-Darling Park in Sanibel Island, Wakodahatchee Preserve in Boynton Beach and Pelican Island.

She used a simple point-and-shoot Nikon, but at times she also uses a Panasonic SLR with a Lumix lens. With the current technology, she enjoys downloading photos to the computer and using photo-imaging programs for special effects.