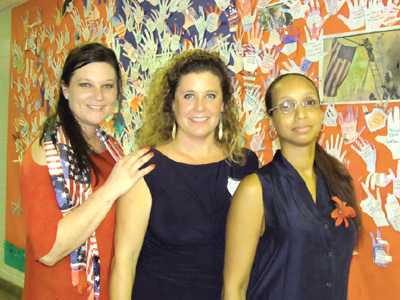 Sept. 11, 2001 is a day that will forever be in the minds and hearts of the American people. The tragic day’s 11th anniversary was observed Tuesday by Wellington Landings Middle School seventh-graders.

To remember the victims, the children put together a remembrance wall with a “Tree of Life,” created from decorated hand cutouts to resemble leaves. Seventh-grade civics teacher Jennifer Tomko came up with the idea last year, after reading the book Legacy Letters by Tuesday’s Children, edited by Brian Curtis.

This is Tomko’s second year putting together the successful project, and it received such tremendous support and great response from all the teachers that seventh-grade civics teachers Janet Winkelman and Theresa Flowers decided to participate this year.

Although the students are too young to remember the events of 9/11, more than 350 seventh-graders came together to learn and demonstrate the solidarity present on that tragic day. “It’s the same activity and same idea as last year, but now the entire seventh grade is involved,” Tomko said.

Winkelman knew she had to get involved after learning that Tomko was going to put the tree together on a small wall in the back of her classroom. “I said, ‘Why don’t we do it out there in the hall, and include everybody?’” she said. “I thought it was a really cool project that she did last year, and I was really excited to do it this year.”

In the beginning of the school year, the tree was the first thing Tomko put up. “The leaves or ‘hands’ for the tree can be done in one day, but the entire tree background has to be set up already,” she said. “It took me a week to do.”

Tomko bought all her own supplies. “Only the markers were supplied by the art department,” she said.

The children used the markers to write the name, age and location of an “adopted” victim on their hands. The students were given the opportunity to pick their 9/11 victims from the book randomly. “One student got the same victim from last year, [and] he liked that a lot,” Tomko said.

The children feel good about what they’re doing. “It builds solidarity throughout the school,” Flowers said. “This project really demonstrates civic engagement.”

Flowers came up with the idea to have the children tape the name of their victims on their shirts. “One of my students did not want to throw the paper with the name away and asked if he could keep it,” she said. “I suggested that they tape it on their clothes, so that people throughout the school could also remember what happened that day.”

The creation of the hands is part two of the two-day project. The first part was the day before 9/11, when the children focused on six stories from the book Legacy Letters. “The children were divided into six groups, and each group got to read their letter,” Tomko said. “We guided them through the letters, so they could really build a connection with the victims and their families.”

This really made an impact on the children. “The letters are from children who lost a parent, to their parent,” Winkelman said. “A majority of the kids are like, ‘Aw, that’s so sad, what if I had lost my parent or guardian?’ and some of our kids have lost a parent.”

The stories that were shared among the students about the events on 9/11 were especially memorable. “One boy told us that his father overslept for work and didn’t get to work on time. He was working at the World Trade Center,” Winkelman said.

Tomko, Winkelman and Flowers are coming up with ideas to make next year’s 9/11 remembrance even bigger by getting the entire school involved. “We’ll probably do something different for every grade,” Winkelman said. “That way they’re not doing the exact same things, but they are building on the knowledge of that day through social studies.”

Above: Teachers Jennifer Tomko, Janet Winkelman and Theresa Flowers in front of the “Tree of life” at Wellington Landings.