The Wellington Chamber of Commerce and its ambassadors recently welcomed Three J’s C Cigars as a new member. The store is located at 4115 S. State Road 7, Suite 4-2 in the Marketplace at Wycliffe.

If you are looking for hard-to-find, premium cigars and a place to comfortably “hang out” and enjoy your smoke, Three J’s C Cigars is a place you ought to visit.

Three J’s C Cigars is owned and operated by Jeremy Fedoruk. Born in Hollywood, Fla., Fedoruk grew up with a mother who was a nutritionist and a father who worked in the tobacco industry. His father, John, worked for a large company that had exclusive licenses with popular cigar brands such as Montecristo, Romeo Y Julieta and Trinidad. Through the years, Fedoruk’s father became friendly with key cigar distributors.

“We saw there was a niche for people trying to find rare, hard-to-get items, and we had the upper hand because my dad already knew everyone,” he said.

So father and son started to fill that niche. They sold La Gloria Cubana cigars, which was a difficult brand to get at the time. In order to store these cigars, Fedoruk’s father converted half of a bedroom walk-in closet into a humidor. “Then all the clothes came out, and it became a larger humidor,” Fedoruk recalled. “Then from there, the business kept growing.”

As the cigar business was establishing itself and growing, Fedoruk graduated from high school in Boca Raton and then attended Florida Atlantic University to study biomechanics and physiology. He earned a degree in physiology.

“By trade, I’m a strength-and-conditioning specialist, so I work with athletes, professional boxers, football players, polo players, jumpers, you name it,” Fedoruk said of his company Athletic Enhancement Group, noting that it includes three other strength coaches who work under him, taking care of clients. For more information, visit www.aegpower.com.

In early 1996, Fedoruk was working with the Miami Dolphins. He told his father about a retail space in Davie that was close to where the Dolphins trained and would be a good location to open a cigar store. Fedoruk said he would invite the Dolphins players he had worked with to visit the store, hang out and draw new customers.

The senior Fedoruk opened his first store and named it Three J’s Cigar Emporium, with each “J” representing a generation of the Fedoruk family: John, Jeremy and Jeremy’s son Joseph. “C” was later added to represent Jeremy’s sister, Christen, who also worked for the family business. Three J’s C Cigars opened its Wellington location in 2006. Another location recently opened in Boca Raton.

Three J’s C Cigars is active doing charitable work in the community, having held two annual golf events — one for the Joe DiMaggio Children’s Hospital in memory and honor of Fedoruk’s niece, Mia, and the other for the Brigance Brigade Foundation, a charitable organization created by O.J. Brigance, a personal friend of Fedoruk and director of player development for the Baltimore Ravens. Brigance was an exceptional athlete who was diagnosed with ALS (Lou Gehrig’s disease) in 2007. The Brigance Brigade Foundation helps people in all stages of ALS with needed equipment, resource guidance, support services and funding to various research initiatives.

Fedoruk said that Three J’s C Cigars prides itself on good service, exceptional cigars and a friendly atmosphere, adding that the store has a highly educated and experienced staff. In addition, it carries the rarest premium cigars priced well.

Fedoruk added that his store is not just for cigar smokers. Wives, friends and family are encouraged to come and relax, watch the wide-screen TVs, and socialize.

For more information about Three J’s C Cigars in Wellington, contact Jeremy Fedoruk at (561) 868-5600 or 3jcigars@gmail.com, or visit www.3jcigars.com.

For information about other businesses in the area, visit www.wellingtonchamber.com. 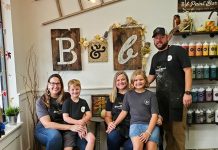