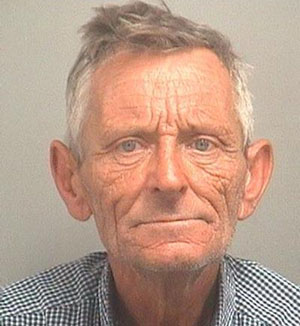 APRIL 24 — A deputy from the Palm Beach County Sheriff’s Office substation in Royal Palm Beach was called to Our Lady Queen of Peace Cemetery early last Wednesday morning following a report of a fire. According to a PBSO report, the deputy arrived at the cemetery at approximately 12:30 a.m. to find 63-year-old Richard Lauta (shown above) standing next to the fire and staring at it. According to the report, Lauta had been arrested previously for setting fires. Lauta was arrested and taken to the Palm Beach County Jail where he was charged with malicious land burning and trespassing.

APRIL 26 — A Miami man was arrested last Friday afternoon on charges of embezzlement and fraud after he was caught trying to open a line of credit with a false identity. According to a PBSO report, a deputy from the PBSO substation in Royal Palm Beach was dispatched to the Costco Wholesale store on Southern Blvd. after they got a tip that 48-year-old Carlos Orta was in the store attempting to open a line of credit under false pretenses. According to the report, the deputies made contact with Orta and found him to be in possession of a fraudulent driver’s license and a fake credit card. Further investigation found that Orta was also in possession of numerous receipts from other stores where he had opened lines of credit using a false identity. Orta was arrested and taken to the county jail, where he was charged with several crimes, including grand theft, making false statements to obtain credit, and using a fake credit card and identification.

APRIL 27 — A Loxahatchee Groves man was arrested early last Saturday morning on auto theft charges following a traffic stop on F Road. According to a PBSO report, a resident of Valencia Drive contacted the PBSO’s Acreage/Loxahatchee substation last Friday night to report that her green 1997 Ford F-150 had been stolen from her home. At the time, the victim believed one of her acquaintances had taken the vehicle without permission. According to the report, a deputy was on patrol at approximately 12:22 a.m. Saturday morning when he observed the stolen vehicle drive by. The deputy followed the vehicle down F Road, and the driver pulled into a driveway. According to the report, the deputy initiated a traffic stop and attempted to make contact with the driver, 34-year-old Enrique Juan. According to the report, Juan exited the vehicle and attempted to walk away, while a passenger fled on foot. The deputy attempted to detain Juan but, according to the report, he struggled with the deputy and refused his verbal commands. The deputy was able to detain and arrest Juan, and later discovered he has no valid driver’s license and had two active warrants. Juan was arrested and taken to the county jail where he was charged with grand theft auto, resisting an officer and driving without a valid license.

APRIL 27 — A deputy from the PBSO substation in Royal Palm Beach was dispatched to the Super Target store on Okeechobee Blvd. last Saturday afternoon regarding a case of shoplifting. According to a PBSO report, at approximately 3:35 p.m. an employee observed an unknown white male put two televisions in a shopping cart and then exit the store. The employee noted that the man was on a cell phone the entire time he was loading up the televisions. According to the report, the suspect fled toward a green Jeep Cherokee that was waiting with the passenger-side door open. The suspect loaded one television and instructed the unknown female driver to drive away, and the vehicle fled northbound on State Road 7. The suspect was described as a white, bald, middle-aged male wearing glasses and two earrings in his left ear. The stolen television was valued at approximately $250. The employee was able to get a license plate number, but there was no further information at the time of the report.

APRIL 28 — A resident of the Isles at Wellington community called the PBSO substation in Wellington last Sunday morning to report a vehicle burglary. According to a PBSO report, sometime between midnight and 8:30 a.m., someone entered the victim’s unlocked vehicle and removed $10 cash from the victim’s wallet along with two BMX bicycles valued at approximately $1,500 each. DNA evidence was taken at the scene, but there were no suspects or witnesses at the time of the report.

APRIL 28 — A deputy from the PBSO substation in Wellington was called to a home in Grand Prix Farms last Sunday afternoon regarding a vehicle theft. According to a PBSO report, sometime between 2 p.m. Sunday, April 21 and noon last Sunday, someone stole the victim’s dark red 2008 EZ GO golf cart from the farm. The perpetrator(s) used an unknown tool to cut the cable lock, which was wrapped around the steering wheel and brake pad of the cart. The stolen cart was valued at approximately $8,000 and had gold striping and a basket. There were no suspects or witnesses at the time of the report.

APRIL 29 — A resident of Peconic Court contacted the PBSO substation in Wellington early Monday morning to report an attempted theft. According to a PBSO report, at approximately 4:10 a.m. the victim was in his kitchen when he heard the bottom of his front gate scraping across the cement. The victim said he looked out his sliding glass door and observed an unknown male running out of the gate. According to the report, the victim went outside and observed the male flee near his neighbor’s apartment. The victim discovered his golf clubs had been moved from where he normally stores them on his patio. According to the report, it was too dark for the victim to give any identifying information about the suspect. There was no further information at the time of the report.

APRIL 30 — A deputy from the PBSO’s Acreage/Loxahatchee substation was called to a home on 86th Road North early Tuesday morning after reports of a fire. According to a PBSO report, the victim’s wife awoke at approximately 1:30 a.m. and saw an orange glow outside. The victim went outside to find that his Ford F-150 was on fire in his driveway, and the Chevy Camaro beside it also caught on fire. Palm Beach County Fire-Rescue responded to the scene, but the truck was entirely burned, while the Camaro was half burned. There were no suspects or witnesses at the time of the report.