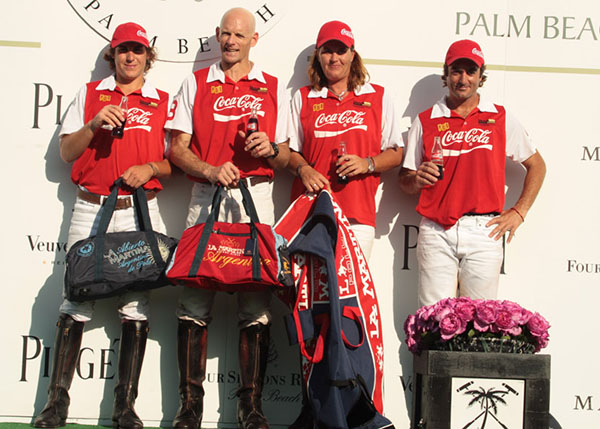 Valiente entered the match on the heels of a convincing win over Orchard Hill in the final of the 26-goal C.V. Whitney Cup tournament and looked to make short work of a Coca-Cola team that was eliminated in the first round of the C.V. Whitney Cup.

Coca-Cola scored the first two goals of the game with Obregon converting a 40-yard penalty shot, followed by a goal from the field from team captain Johnston on a well-executed 100-yard run. Valiente 10-goaler Cambiaso got his team on the scoreboard with 21 seconds on the clock, cutting the Coca-Cola lead to a single goal, 2-1. Both defenses stepped it up in the second chukker, but the edge went to Valiente. Fouls cost the Coca-Cola team as Caset converted a pair of penalty shots, giving Valiente a 3-2 edge, while Coca-Cola was unable to break through the Valiente defense.

American 9-goaler Arellano tied it up 3-3 midway through the third chukker, but Cambiaso answered right back for Valiente for a 4-3 advantage. Obregon missed on a 60-yard penalty shot that was deflected over the end line, and then scored on the ensuing safety to make it 4-4. Merlos gave the lead to Coca-Cola on a backhander following a penalty attempt, but a great individual effort by Cambiaso had it all even at 5-5 with eight seconds on the clock.

Cambiaso intercepted a backhand shot by Johnston near the Coca-Cola goal and raced past Merlos for the go-ahead score, 6-5. A late foul sent Obregon to the penalty line, where he converted a short penalty shot to knot it up once again at 6-6.

Coca-Cola broke it open in the fifth chukker with three unanswered goals to take a 9-6 lead. Arellano scored the first goal of the chukker in the opening 20 seconds. Johnston scored the first of two fifth chukker goals at the 6:22 mark, following it up with another goal from the field at 3:54. Valiente had a number of squandered opportunities, falling behind with one chukker left to play.

Johnston scored her fourth goal of the match to make it 10-6 as Valiente struggled to coordinate an effective attack. Caset scored the final goal of the game at the 2:51 mark, and Coca-Cola held on for the 10-7 win.

Johnston led the Coca-Cola offense with four goals and was named MVP for her efforts. Obregon scored three goals on penalty shots, while Arellano added two goals from the field and Merlos scored once for the win. Cambiaso set the pace for Valiente with four goals. Caset was credited with three goals in the loss.

ABOVE: Team Coca-Cola celebrates the win with their favorite beverage. Photo by Alex Pacheco