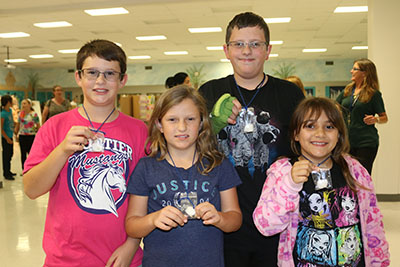 Kim Goodman, coordinator of the EASA program, said the goal of STREAM Night was to bring the parents and community into the school and get them involved.

Students were given the opportunity to make slime and create a living necklace, a water cycle wristband and crafts with corn kernels.

One of the more popular projects, the living necklace is a common science project around the school, where students place a wet cotton ball in a small plastic baggie, add a seed and string the baggie into a necklace. The seeds — often radish or cucumber — quickly germinate from the student’s body heat. They are worn during the day and taken off at night, which mimics the way the sun warms seeds. In a few days, the seeds will sprout and begin to grow a plant.

Popular with many of the children was the Palm Beach Beekeepers Association’s booth, with bees, honey and trivia. Red Barn and Purina brought two rabbits and had representatives on hand to talk to students. McCarthy’s Wildlife Sanctuary brought an albino Burmese python and other animals.

Despite the wet weather, approximately 75 parents and students showed up to learn more about the school and its programs.

Teachers offered tours of the EASA gardens, rabbit hutches and chicken coops, which fascinated parents and captivated the children. Juice Plus donated the hydroponic tower, and Red Barn supplied the chicken coop, Goodman said during a tour, while pointing out the raised garden beds the students made, and the school’s original garden beds. Just recently, the school put in a butterfly garden.

Next on the tour was the EASA animal lab, which is home to a ferret, guinea pigs, a rabbit, a gecko, fish and hamsters.

“Red Barn is a business partner of our school. They were our No. 1. Without them, we couldn’t have done it, because they donate all of the food for our animals and all of the bedding for our animals,” Goodman said. “In addition, they have given us animals. They gave us our rabbit, Bandit, and then they’re going to give us some future things. They’ve done a phenomenal job with our school, so we really appreciate them.”

The hamsters in the animal lab, both female, came to Frontier pregnant and have provided the students with a close-up view of the six babies going through the maternity ward. Six lucky children were able to take home the baby hamsters through a raffle held during STREAM Night.

Many student projects were on display in the cafeteria, including fourth-grader Leanna Beck’s Seminole tiki hut and fireplace, which she made with items from her yard and from the craft store. Beck used clay to make food such as oranges, pieces for the bow and arrow set, and accessories for the fireplace. She used plants for the tiki hut and glued small air plants onto green paper to represent vegetation.

The EASA program, which was implemented this school year, had its beginnings in the previous school year with Goodman’s third-grade classroom, where she began an outdoor class garden growing herbs, vegetables and citrus trees.

Then, McConville suggested adding chickens. “The next thing we know, we had animals and chickens,” Goodman said.

When Principal Susan Groth learned about the project, she suggested launching the choice program.

Groth has seen a huge change in the student body as a result of Goodman’s program.

“Whenever we had children who needed a different environment, they needed some remotivation, we’d bring them into Kim’s environment, and, oh my gosh, what a difference we saw in those children,” Groth said. “They’d even come out here and water the gardens last year. They took responsibility and ownership in everything that was happening. We just wanted to expand it for the rest of our students.”

Goodman saw a sharp decrease in tardiness and absences with the gardens and the animals, which Groth also took note of.

Hydroponics, an aqua room and several other ideas are in development.

Having the STREAM Night provided a great opportunity for parents to see what their children have been talking about. “This is important because it has really excited our students,” Groth said. “Our students love coming out and seeing the animals on a daily basis and the hands-on experience and being a part of this whole Environmental & Animal Science Academy — watching the birth of it and just watching it grow.”

ABOVE: Zack, Riley and William Habegger, and Jazmyne Yarnold, show off their “living necklaces.”