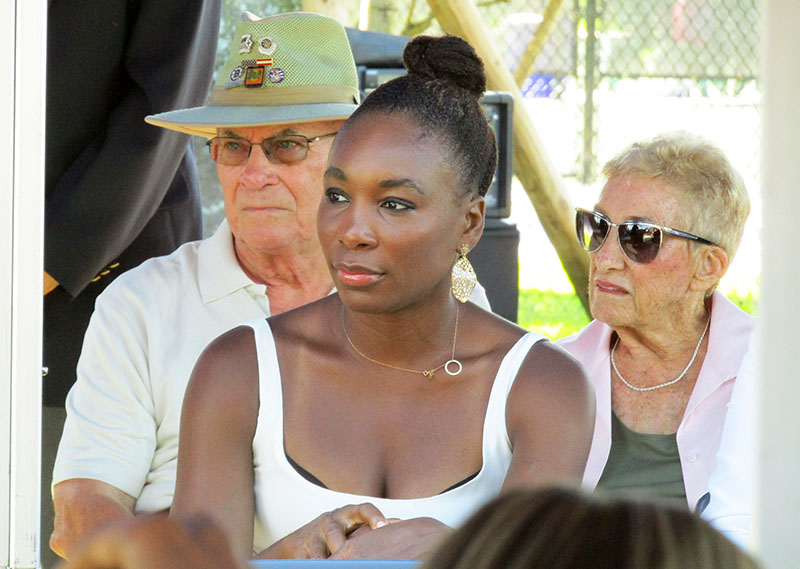 Several hundred people turned out for the grand opening of the new Wellington Tennis Center on Tuesday, highlighted by the appearance of tennis star Venus Williams.

“What a great facility. I’m at a loss for words,” Mayor Bob Margolis said.

The center received divided approval by the council amid complaints from residents, especially tennis players who used the old courts, that they liked the old location and that the new facility at the corner of Lyons Road and Stribling Way would be too remote.

But those differences from two years ago were not the focus of Tuesday’s celebration.

Vice Mayor John Greene said he had been driving past the new facility regularly for the past year.

“It seems like yesterday that we broke ground, and what an incredible turnout,” Greene said. “So many things we do on the council seem to be faced with controversy. Many times it takes real courage and a vision to make some of the tough positions… We wouldn’t have this tennis center and this wouldn’t be here if we didn’t have the support for the tennis program over the years.”

“What a great day,” he said. “Not only do we have great weather, we have a beautiful crowd and a beautiful facility. I’m really invigorated about it because, normally when we have these ribbon-cuttings, the council and staff and maybe the designer come, but not the crowd, the public, the participants and the members who want to use this facility.”

Willhite recognized longtime tennis pro Tommy Cheatham for his work to make the tennis program successful, to a round of applause from the audience.

“He is a big part of why this tennis facility is here, because our program has grown,” Willhite said. “What this facility has allowed us to do is for us to grow. We went from 16 courts to 21. We have room to build more courts here.”

Councilman John McGovern, who grew up in Wellington, said he had learned to play tennis at the old facility.

“The idea that we have come to this point, this amazing facility on the eastern edge of Wellington now… what a great day it is today,” McGovern said.

He called attention to the fact that the Wellington High School tennis team achieved a first in the last couple of weeks. The boys doubles team, Justin Sacks and Jacq Hundley, won the state title in individual doubles.

Gary Pirtle, vice president of Pirtle Construction, said it was an honor to have completed the state-of-the-art facility.

“It could only take place because of the visions of the council, the mayor, and parks and rec,” Pirtle said.

Young Song of Song + Associates introduced many of her staff members in attendance, including her partner in the interior design of the center and the featured speaker, Venus Williams, who thanked the Village of Wellington for making the project possible.

“We’re based up in Jupiter, and I’ve been a local here for the last 20 years and counting,” Williams said. “It’s wonderful to see facilities like this. You know I’m a little biased toward tennis. I really should have brought my racquets so we could have a little hit after.”

The groundbreaking for the new community center was not as well-attended, but enthusiastic.

Greene said the day had been very exciting, with the tennis center grand opening followed by the groundbreaking for the village’s next major project.

“I am very proud to be a part of this,” he said. “As I said earlier, there’s a vision, and the courage that we have to have when we sit here and make decisions with tax dollars, but at the end of the day, this is for you guys.”

Willhite, who took the impromptu opportunity to use a backhoe to knock off a piece of the old community center, said it was not a demolition, but a part of a rejuvenation. “What this new facility will be is some more rejuvenation to this area,” he said.