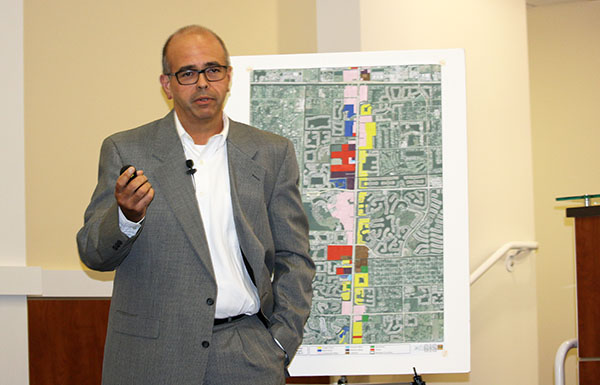 The Village of Wellington held the final in a series of four town hall meetings regarding the future of the controversial K-Park property Tuesday evening in the Wellington Village Council chambers.

The meeting was led by Wellington staff members Jim Barnes, Mike O’Dell, Bruce DeLaney and Bob Basehart, and focused on future uses for the 66.8-acre site, located at the southwest corner of State Road 7 and Stribling Way.

“The council and staff are interested in having input from the community, residents and business people, providing us with what you think ultimately should be done,” Planning & Zoning Director Bob Basehart said.

The land currently has a reuse water pond and pump station and is under lease with a farmer for agricultural production. Since the village purchased the property for nearly $8.5 million in 2003, there has been a great deal of interest in the land, Basehart explained.

K-Park was originally planned to be a large park project, and later considered for a college campus and an equestrian venue. Most recently, there were six proposals submitted to buy the land for mixed-use projects. The proposals varied between $15 million and $25 million for the land and included mixes of commercial, recreational and residential uses.

Wellington Projects Manager Mike O’Dell explained that although the conversation is currently about one small parcel, it is part of the larger State Road 7 corridor. Approximately 45 percent of that is retail, 35 percent residential, 8 percent office, 7 percent churches and schools, and only 5 percent undeveloped space.

“That’s our last chance, basically, to look at what’s going on the State Road 7 corridor,” O’Dell said. “It also gives us some opportunities to kind of chart the course for the future. We have to ask ourselves, is what we have on SR 7 really sustainable? Because what we’re looking at today are the things that we’re going to see in the next 20 years.”

Parks & Recreation Director Bruce DeLaney explained that Wellington’s award-winning parks and recreation program is an important part of the community. With 175 programs a year, the village has been able to meet, for the most part, the recommended recreation standards for the community at its current population.

“Our previous councils and committees got together and made tough decisions as to whether or not to purchase that property,” he said. “Keep in mind, it was originally slated as a park for the village. Not a specific type of park, but a park, because there’s only so much land.”

Things change, DeLaney explained, and the council is now looking for direction as to what to do with that land.

At Village Park alone, he said, every Saturday, 6,000 people participate in sports. In the last four years, he has seen a 9 percent growth in participants.

“I would highly doubt that the demand for our facilities will reduce in any capacity,” he said.

Director of Operations Jim Barnes began the question-answer part of the meeting, where 91 clickers were passed out for residents to provide survey responses. This meeting, as at the other three meetings, had the same questions in order to allow residents to voice their opinions during a consistent presentation.

Ninety-six percent of those in attendance were Wellington residents. Almost everyone in attendance came to the meeting to provide input on the future of K-Park.

The vast majority of survey participants were homeowners, and almost half (42 percent) live within one mile of K-Park, while 29 percent were within three miles.

The closest vote for the night, 49 percent to 51 percent, was whether or not a mixed-use downtown concept, with three-story buildings, would be ideal. Respondents voted against high-population residential, an arts building, and golf or bowling locations.

After the survey portion, about a dozen speakers stepped forward to voice their views.

“Make it a park. Make it a botanical garden; make it something. Every part of Wellington doesn’t have to be developed,” he said. “This is a beautiful piece of land in a beautiful community… don’t allow any of us to be bullied into any kind of a decision. Stay true to what you believe that you want and where you want to live.”

Ken Gutman proposed “smart growth,” with a mixed use including planned entertainment. “Have it a destination. Make it unique. We have an area. What can we do with it that’s different? Why come to Wellington?” he proposed.

Mark Meyers pointed out that if there are restaurants and other businesses in K-Park, they will be competing for customers with all of the other establishments in the area.

Dr. Neal Warshoff attended the first and final K-Park meetings, and noticed a difference. “For me, the paradigm that we have doesn’t work,” he said.

He suggested finding a middle ground of an open space, where people can talk, join others and share ideas. “Come up with some reasonable decisions and get it done. We can’t keep going like this,” Warshoff said.

Larry Sweetwood suggested that nothing be done with K-Park until other properties are built out. His suggestion was to create something similar to Central Park in New York City.

“Just build a park. That was the original plan. That’s what our tax dollars paid for. And this way, it would serve the entire community,” Sweetwood said.

“Anybody who thinks this could be built by any builder without putting in some residential is dreaming, because no builder is coming in here,” he said. “Do you want to start supporting a park and paying the taxes? Is that what you want? Or do you want some income generated? Why are people living in Wellington? Because it’s an upscale, well-known community… We need the wow factor.”

Marcianne Smith suggested recreational activities at K-Park. “My vote is, keep it green,” she said. “Don’t do anything until we can figure out the right use for it. When I purchased my home, it was green land, and that’s what I’d like it to stay.”

ABOVE: Director of Operations Jim Barnes leads the question-answer part of the meeting.