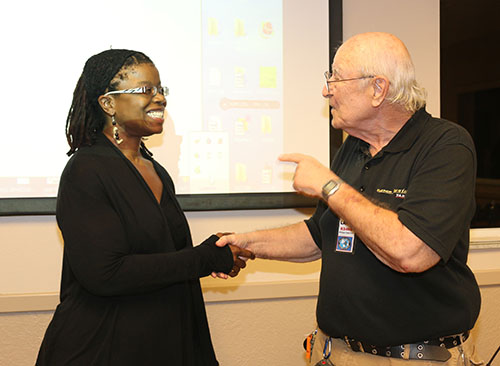 “If we’re not getting the activity in the deep tropics, typically we don’t see as much activity overall, and that’s what happened this year,” she said. “Part of that is related to El Niño. Unusually, we saw El Niño begin to strengthen in the summertime, when normally we see it start to strengthen in October and November, between Halloween and Thanksgiving. This year, it actually started strengthening in the late spring, early summer.”

Increased wind shear over the tropical Atlantic, she said, is one of the impacts of El Niño.

“Even though here in the Atlantic, we may be quiet, usually somewhere else in the world they’re seeing an increase in activity,” Moses said.

ENSO, the El Niño/Southern Oscillation, is not the cause of all of the unusual weather, she explained. The official definition is “the year-to-year variations in sea surface temperatures, convective rainfall, surface air pressure and atmospheric circulation that occurs across the equatorial Pacific Ocean.”

There are common misconceptions regarding ENSO, such as that El Niño will come to Florida, that all El Niños are the same, that El Niño is a storm, and that El Niño brings rain, storms and tornadoes.

In reality, she explained, ENSO is one of the known variations in weather and climate. Three phases of ENSO, between the atmosphere and the oceans, are recognized, including El Niño, La Niña and Neutral. El Niño is the warm phase, La Niña is the cool phase and Neutral is the phase where nothing exciting occurs.

A strong El Niño, Moses explained, has a direct relationship with winter storminess in Florida.

“In any given year, we can have severe storms, and it’s always good to be prepared,” she said.

Severe weather outlooks for the next eight days are put out by the Storm Prediction Center. Severe weather watches, she explained, are issued when the center determines conditions to be favorable for organized severe weather, and usually last six to eight hours.