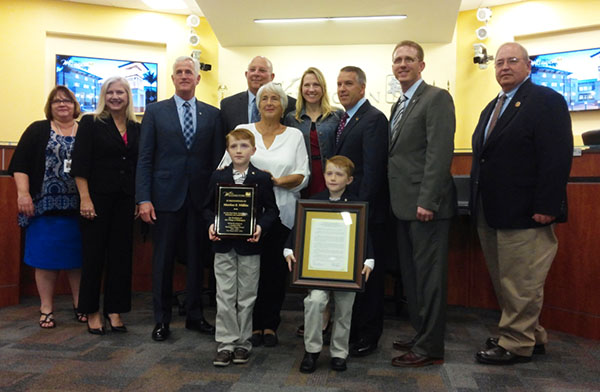 The Wellington Village Council recognized Councilman Matt Willhite on Tuesday for his eight years of service.

Willhite, who was elected to the council in 2008 and re-elected in 2012, is leaving this month due to term limits. He is currently running for the District 86 seat in the Florida House of Representatives. Prior to his council election, Willhite served on the village’s Public Safety Committee.

In a proclamation issued Tuesday, Willhite was credited with being part of a council that upgraded the village’s facilities, such as building the Wellington Municipal Complex, the Wellington Amphitheater, Scott’s Place playground, the new Wellington Tennis Center and the soon-to-be-completed new Wellington Community Center.

“One of his greatest contributions to the village was the Patriot Memorial, which was built through his determination, tireless efforts and hard work,” the proclamation stated.

He has been active in the western communities’ efforts in fighting for the extension of State Road 7 and volunteers with many organizations and charities around the county. He was also recognized for his participation with the Honor Flight program, in which he has escorted World War II veterans to Washington, D.C.

Willhite thanked the council and village staff for the recognition. “It has truly been an honor to serve this village, to serve the residents, to serve the visitors and the people who come here and call Wellington home,” he said.

He credited his wife, Alexis, for leading him to Wellington.

“I was fortunate enough to meet someone here in Wellington, and when I did, first of all, this place was a long way away,” Willhite recalled. “I lived in Lake Worth at the time, and the roads were winding, it was hard to get to, and it was dark. I said, ‘Man, I’ll never move to Wellington.’ After dating for a while and deciding to start a family, we moved to what I feel is probably, short of my hometown in Michigan where I was born, the greatest place that I’ve found to live.”

He said a testament to that was that his sons, Luke and Mark, who were present at the meeting, go to some of the best schools in the state.

“I’m so proud to have them here with me,” Willhite said. “I only hope that they realize how beneficial it is. I thought that it was so good, that when my dad passed away, I asked my mother to move to Wellington — not just so she’d be close, and she’d be a great baby sitter, but because I knew it was a good place for her to be.”

He thanked his wife for standing by him through his years on the council.

“She is probably single-handedly the happiest person in the Village of Wellington, being that this is my last meeting,” Willhite said. “That’s not because she doesn’t recognize the efforts and the services and sacrifice that we gave to the village, but because there’s a large ‘honey-do’ list at home, and because the late-night meetings and the discussions and differences that have happened in Wellington over the last eight years, it takes a toll on your family.”

Willhite said he feels fortunate to have had an impact on the community and hoped it was beneficial as a whole. He thanked the village staff for their help.

“The staff here is amazing. We haven’t always agreed on everything, but that’s not what we’re here for,” he said. “In a democracy, we’re here to work for betterment, and democracy means that we’re afforded the opportunity to have differences of opinion and to work on things, and I think that through that amount of time and discussion over the years that I’ve been here, we’ve come up with some great things.”

He noted that the village has been recognized as one of the greatest places to live, for being among the most fiscally responsible and having one of the lowest crime rates in the state.

“It’s a great place to live and to grow a family, and I appreciate every bit of the staff’s work for that,” Willhite said. “I know that I may not have said it all of the time.”

Willhite thanked the present council and previous members. He also thanked his supporters, who he said kept him going, and his critics.

“It’s democracy. We have difference of opinions,” he said. “We may look at things differently and think the outcome could be better, or different, but if it wasn’t for all of us, we wouldn’t be in this greatest place, not only this village, but this country.”

He also wished the best for Councilman-Elect Michael Napoleone, who will replace him on the council.

“I wish you the best because you are young like me, have a family, have children, you’re entrenched in this community, and you’re going to work to make this a better place,” he said.

“I hope you don’t forget us because you’re going to be up in Tallahassee,” Gerwig said. “I know you won’t forget us, but we’ll have an advocate there for the village also, so thank you. “

Vice Mayor John Greene said it was a pleasure to serve with Willhite, although he felt it was to Willhite’s benefit when he joined the council.

“When I got elected, they took the target off of Matt’s back and pinned it right on mine,” he said. “I took a few punches, but they were worth taking, because seeing Matt fight the fight that was important to this community, I was happy to sit side-by-side with him.”

Councilman John McGovern said he and his wife, Michelle, have known the Willhites for a long time. “I have to say that they are truly a great family, and it is always with them, family first,” he said.

McGovern said that the best thing about Willhite was that everyone always knew where he stood.

“There was never a question about how Matt was going to vote on an issue, because if anything, he told you, then he told you again, but for sure, the decision-making process was clear, and you always did what you thought was best for this village,” he said.

McGovern also thanked Willhite’s family for giving up their father and husband the last eight years, and presented Alexis with a bouquet of roses.

Village Manager Paul Schofield said that he and Willhite had had their differences over the years.

“Whether we agreed or disagreed, I always knew where you stood, and what I can say about your eight years on this council is that they’ve been good for Wellington,” he said. “I knew that whatever we talked about, your primary concern was for Wellington.”

Mayor Bob Margolis said it wasn’t so many years ago that he was on the council and Willhite was at public comment complaining about too much water in his well, and later came to him asking if he should consider running for the council.

“I said, ‘Well, heck yes, because instead of you yelling at me from down there, you could be yelling at me up here,’” Margolis said. “I will challenge any of your naysayers to show me their accomplishments and put them up against what you did.”

ABOVE: Wellington officials with Councilman Matt Willhite and his family.