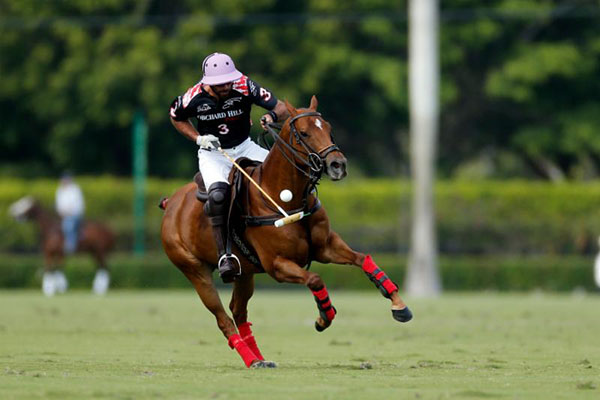 The 2017 USPA Gold Cup opened last Sunday with a double-header at the International Polo Club Palm Beach. Both games resulted in last-gasp victories.

In the first matchup, Valiente defeated Coca-Cola 11-10. In the 3 p.m. featured match on Engel & Völkers field, Orchard Hill won 8-7 in the final second of the game, defeating Audi.

It was clear from the start that Audi was game-ready. The team opened the day with two quick goals by Gonzalito Pieres and Andrade, taking a 2-0 lead. Orchard Hill missed both shot attempts, a common storyline for the team, which struggled to convert shots at goal the entire game.

Nonetheless, Orchard Hill was packing heat: 10-goaler Facundo Pieres, one of the elite penalty shooters in the sport. The key for Audi was to avoid putting him on the penalty line, but they couldn’t pull it off in the second chukker. Three attempts by Facundo Pieres resulted in two goals, with Polito Pieres adding a goal from the field to tie the game at 3-3.

Orchard Hill relied on a two-man strategy with the Pieres cousins. One drove forward and the other provided support in the trailing position. While it was effective in generating scoring chances, with Orchard Hill shooting at goal 17 times, it was uncharacteristic of them to only shoot 24 percent from the field for the game.

Audi struggled to take advantage in the back-and-forth game. They only converted two of eight shots and missed both penalty attempts in the third, fourth and fifth chukkers, preventing Audi from breaking away in a game that eventually came down to the last few plays.

With Orchard Hill trailing by two goals, Facundo Pieres put down the hammer, scoring two goals from the field. After a late Orchard Hill foul gave Audi a penalty in their defending half with less than a minute remaining, Jota Chavanne forced a steal, leading to a Pieres breakaway. Sprinting to goal on a full-field run, Pieres put the ball through the posts in the final second of play. His sixth goal of the day gave Orchard Hill an 8-7 victory.

To top off the day, Facundo Pieres was named MVP, and his mount Jazzita was named Best Playing Pony.

Earlier in the day Coca-Cola tried mightily, but in the end to no avail, to bounce back against a Valiente team that had beaten them soundly in the opening round of the C.V. Whitney Cup.

The USPA Gold Cup tournament continues Sunday, March 19. Orchard Hill faces Valiente at noon, and Coca-Cola plays Audi in the 3 p.m. featured match on Engel & Völkers field. All games in the 2017 USPA Gold Cup are being live streamed by the USPA Polo Network at www.uspolo.org.

The polo season runs through April 23 with a wide array of social options available each Sunday afternoon. For more info., visit www.internationalpoloclub.com.