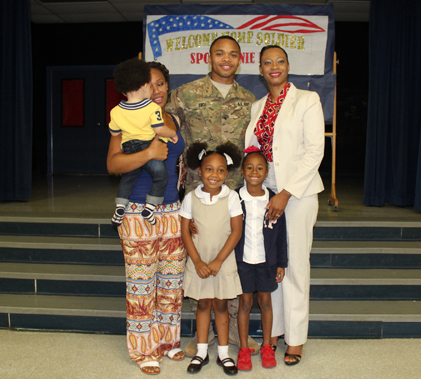 U.S. Army Specialist Johnnie Duce came home to his family last week, but waited almost a whole day in order to surprise his daughter, Aliana, at her school.

Duce made that surprise visit to see his daughter at Cypress Trails Elementary School in Royal Palm Beach on Thursday, April 27.

“It’s just a beautiful feeling to be back home,” Duce said. “I’m blessed. I appreciate all the support that you guys have given me. It really means a lot.”

Aliana was expecting her father to be home Saturday, April 29. She probably didn’t know how much of an impact she would have from communicating with her kindergarten teacher, Angelita Browne, who gave great attention to Aliana when she told her that her father was coming home. “I had an in-depth conversation with her, and she said, ‘Daddy is coming home soon,’” Browne said. “I said, ‘Really? I know you get to Skype with him once in a while,’ and she says, ‘Yeah, but he’s really coming home, and I’m excited.’”

This was a few months prior to Duce’s homecoming. That day, Browne decided to organize not only a welcome home celebration, but a surprise for Aliana as well.

“I said, ‘Let’s plan something for him when he comes home,’” Browne said. “I said Memorial Day is coming up. She says: ‘I know what that means. We remember about the ones who died.’ I said, ‘Well, we can also remember those who are living. Let’s come up with a plan. What should we do?’”

Of course, this was a great diversion for Aliana, who was working with her classmates to perform patriotic songs such as America the Beautiful. Aliana and her classmates practiced learning songs in Browne’s classroom, and last Thursday was the first day that the children visited the cafeteria to continue rehearsing songs to surprise Army Specialist Duce.

“I kept saying, ‘OK, boys and girls, there are going to be people here to tape us, just in case we want to show it to some other veterans,’” Browne related, referring to the reporters who were now in on the surprise.

Aliana and her classmates entered the cafeteria to prepare. Browne’s class was joined by another class that included Aliana’s cousin, Micaiah Thomas.

After “rehearsals” of different selected songs, Aliana’s father made his way from the back of the cafeteria kitchen to the front where all the students, along with Aliana and Micaiah, were facing.

“Daddy!” Aliana exclaimed as she jumped into her father’s arms, and only a second behind her was Micaiah, who joined the embrace in front of classmates, teachers and staff.

“It’s so important that we acknowledge these guys. They are our own heroes. We need to let them know that they are welcome when they come back and for them to feel good to come home,” Principal Shari Bremekamp said. “[Aliana] has been so, so excited about it since before spring break.”

Bremekamp presented a big card that Aliana and her classmates made in Browne’s classroom on behalf of them and Cypress Trails Elementary School, thanking Duce for his service.

Aliana’s little brother, Jaxson, 11 months old, was with their mother, Felicia, as he eventually found himself in the arms of his father, who said that he had last been with the little boy when he was just 2 months old. Duce was looking forward to plenty of family time now that he was home.

His mother, Sandy Forbes, was also a big part of the surprise. She made sure to hide Duce away from an excited Aliana, who at the time was still expecting her father home two days later.

“First, I would like to thank God that he took care of him while he was there. Seeing him last night and him being able to spend the night with me, that was very special,” Forbes said as she smiled from ear to ear. “I’m very appreciative that I had that time with him.”

For the two as mother and son, it was the first time in their lives that they had been separated.

“That was painful just knowing I can’t touch him, can’t hug him. He’s a hugger, and so am I,” Forbes said. “I was so grateful when he texted and said he had landed on U.S. soil. It was overwhelming, the joy that I felt.”

Duce drove from home from Georgia in order to be with his family and make the big surprise.

Duce grew up in Wellington, where he was involved in the Western Communities Football League as a child. He attended New Horizons Elementary School, Polo Park Middle School and graduated from Wellington High School. He attended Gardner-Webb University for two years before deciding to pursue a career in the military.

Duce served nine months of active duty for the U.S. Army in Kuwait.

This was the first time that Cypress Trails had been able to help join a military family together after they were apart for an extended period of time.

“We do a lot here to celebrate veterans and on 9/11 to remember those who fought for our country,” Assistant Principal Lauren Hall said. “This is just kind of the next step, and we’re really excited to be part of it.”