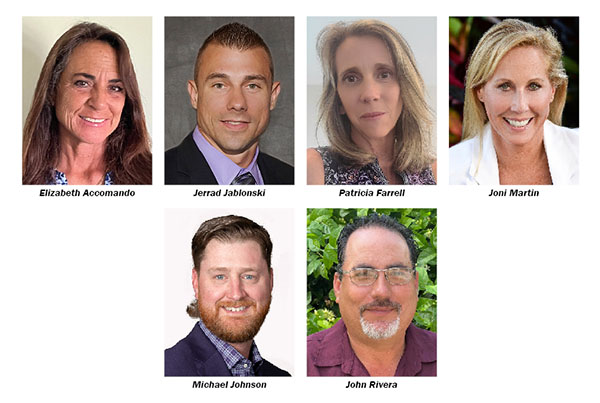 With early and mail-in voting well underway, the six candidates for three seats on the Indian Trail Improvement District Board of Supervisors will be looking for last-minute votes ahead of the Tuesday, Nov. 8 election. Here’s a round-up of the candidates and a few of the key positions they shared in written statements in September.

Seat 1 incumbent Supervisor Jennifer Hager is retiring after 12 years on the board. The candidates to replace her are Elizabeth Accomando and Jerrad Jablonski.

Accomando, a Carol Street resident, moved to Florida in 1991 and into the ITID area in 2013. She has a background as an insurance adjuster and business owner and is the founder and secretary/treasurer of the Barky Pines Animal Rescue & Sanctuary. This is her first run for elective office.

“I will strongly advocate to keep our parks clean and safe, our roads traversable and protected, proper drainage and our water supply intact. I will vote that our tax dollars are spent wisely, working for us to the greatest good,” she wrote. “As for incorporation — a supervisor does not afford an opinion on the matter. However, as a resident, I believe that our community is entitled to their right to vote.”

Jablonski, who lives on 61st Place North, grew up in the area and is the owner of Jabrewski’s Pizza Company in the Acreage Shopping Center on Seminole Pratt Whitney Road and manages a valet parking company in West Palm Beach. This is his first run for elective office.

“Above all, I want what’s best for our community, to keep things fair and honest,” he wrote. “As stated before, I am all for keeping Loxahatchee the way it is, unincorporated. However, I do think it should be left up to the community as a whole to decide.”

In Seat 3, incumbent Supervisor Joni Martin is seeking a second term on the board. She faces a challenge from Patricia Farrell.

Farrell, who lives on 87th Lane North, is part owner of KP Farrell Inc., an athletic training facility in Royal Palm Beach. She also manages a Palm Beach condominium building. This is her first run for office.

“Areas that I would like to be involved in are events, drainage and infrastructure,” she wrote. “If elected, I will ask questions. I will listen to suggestions from board members, ITID staff and community members… I am a team player and will work hard and with the utmost integrity.”

Martin, a Hall Blvd. resident, has lived in Florida for 20 years, the western communities for 12 years and the ITID area for six. She is a makeup artist with a background in retail sales who studied radio and TV production in college.

“As [board] treasurer for the past three years, I have been faced with making hard choices and decisions,” she wrote. “I want to keep our roads and infrastructure our top priority without overburdening our taxpayers by continuing upgrades to our roads with millings, replacing culverts where needed, clearing canals and enhancing road safety… I would like to continue to use my experience and knowledge to ensure success for the Indian Trail Improvement District.”

In Seat 5, incumbent Supervisor Michael Johnson, who currently serves as ITID president, is seeking a second term on the board. He faces a challenge from John Rivera.

Johnson is a resident of 64th Place North. He is a manager with TKM Bengard Farms, a large lettuce-grower in Belle Glade.

Johnson did not respond to the Town-Crier’s September invitation to share a statement with voters. However, in a July interview, he said his priorities would be completing the R3 road paving, milling and traffic-calming project, improving traffic flows near schools and seeing that the J.W. Corbett Wildlife Management Area levee is completed. He said residents deserve a chance to vote on incorporation. “We have a lot on the table, and a lot of programs that need follow-through,” he said at the time. “I want to keep things going and continue to fight for the residents of the district.”

Rivera, a Tangerine Blvd. resident, is president and owner of Sunshine Safe & Lock and a local equestrian activist. Rivera previously ran unsuccessfully for Seat 5 in 2018.

“From drainage, roads maintenance and the parks, maintaining a government that is both efficient and serves the constituents of its community is crucial,” he wrote. “I do not support incorporation and don’t believe public funds should be used for studies. In regard to taxes, I will never support any increases.”