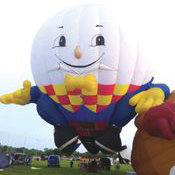 From the polo fields of Wellington to the skies above, the Ford Trucks Polo & Balloon Festival will offer a weekend of great entertainment for all ages while supporting America’s troops.

The event is brought to Wellington by Polo America and hosted at Polo West, located at 2470 Greenview Cove Drive off South Shore Blvd. in Wellington, from Friday, May 11 through Sunday, May 13. Proceeds from the event will go to the Wounded Warriors Project and the Injured Marine Semper Fi Fund.

“It’s one of these great events for the entire family,” said Randy Russell, president of Polo America. “It doesn’t matter if you’re 2 years old or 82 years old. Everyone has a fascination with hot air balloons. It’s a great experience because you can interact with them. You can stand right next to the balloons and watch as they inflate. The sound of it and the heat from the burners are something you’ll never forget.”

Admission to the festival is a donation to the organizations, Russell said. In addition to the balloons and polo matches, there will be food, drinks, music and more.

“We want to make sure that everyone can enjoy this event and honor our troops,” he said. “That’s what this event is really about.”

Festivities begin Friday at 5:30 p.m. The Polo West Polo Cup begins at 6 p.m., with a match between Ford Trucks Polo and the Palm Beach Polo & Hunt Club. After the match, the crowd can enjoy watching as balloons are inflated on the field, and guests will be able to enjoy tether rides for $5 per person.

“The balloons will take guests up about 100 feet,” Russell said. “All of the money goes directly to the Wounded Warriors Project and the Injured Marine Semper Fi Fund.”

But, he cautioned, space is limited for tether rides; those wishing to participate should get their tickets early. Tickets for the rides go on sale at 5:30 p.m.

Among the dozens of balloons to be present are two specially shaped ones, Russell said.

“One is Humpty Dumpty,” he said, “and then Budweiser will be bringing in their Budweiser Select balloon. It is 15 stories tall. It will dwarf every other balloon out there.”

The festival returns early Saturday morning as a sea of balloons will take to the skies during a mass ascension. Balloons will be inflated starting at 6:30 a.m. and take flight at 7 a.m., and guests are welcome to walk among them as they’re inflated and lift off.

“About 20 Marines and soldiers wounded in active duty will be going up with the balloons,” Russell said. “It’s our way to honor them and thank them for their service.”

After the match, the field will be lit up with the Floridian Community Bank Balloon Glow starting at 8:30 p.m. All of the balloons will fire up their burners to light up the night.

“It’s awe-inspiring,” Russell said. “It’s like walking through a field of seven-story fireflies.”

Sunday morning brings another mass ascension at 7 a.m., followed by tether rides at 7:30 a.m. Guests will be able to enjoy food and vendors before the festival closes at 9 a.m.

This weekend’s festival will be the 13th that Polo America has put on combining the sport of polo with hot air balloons. The idea was sparked in 2005 when Russell was looking for a backdrop to the presentation of the Ford Trucks Global Cup at the Royal Palm Polo Club.

“I wanted something spectacular,” he said. “The crowd loved it. When the presentation was over, we got a call that no one was leaving.”

“We had 36,000 people for our first event,” he said. “There was traffic backed up in every direction.”

With its large polo community and great weather, Russell said that Wellington is a natural location for the festival.

“It was made for Wellington,” he said. “Wellington is a unique area. When we do this in Las Vegas, we do it at least 10 miles from a populated area. In Wellington, we have thousands of homes surrounding the polo field. About 2,000 people could walk from their homes right to the field. We’re expecting a great crowd.”

With the success of the events, Russell said he is glad to be able to use them to give back. “I’ve been very fortunate to be able to combine my hobbies and do some great things,” he said. “Raising money for the troops is just the icing on the cake for this. Ford Trucks has been with us through the entire course. They really saw the value in honoring our military.”

For a full schedule of events, visit www.poloamerica.com and click “Event Schedule.”