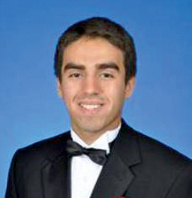 Castro competed against 37 other nominees solicited from every public and private high school in Palm Beach County.

“Herman represents a highly qualified and very competitive group of nominees and finalists that excel in the combination of classroom excellence, in untiring and meaningful community service and in high-level athletic achievement,” said Dave McIntosh, who chaired the panel of judges. “Palm Beach County takes great pride in our public and private schools, in their faculties and administrative leaders and, especially, in students like Herman Castro.”

In the academic realm, Castro ranks among the top of his peers. He received his high academic marks while undertaking a series of AP and honors courses. His 3.56 GPA and 4.30 HPA place him in the top 5 percent of his class of more than 600 students.

Castro’s resume is replete with accomplishments and involvement. He has been pivotal in his school’s Future Business Leaders of America chapter, serving as president and as treasurer. In addition, Castro was elected as treasurer of the Psychology Club for four years, class representative in student government (2010-11) and executive board parliamentarian (2011-12) and more. He also served on the varsity debate team.

Due to this extensive list of undertakings, Castro has been the recipient of several honors and awards. Some of these include receiving the Yale Book Award and being a nominee for one of the county’s Pathfinder Scholarships.

Castro has established himself as a major contributor in the community. He has worked closely with Epona’s Path, a nonprofit association dedicated to the prevention of inhumane treatment of horses. Castro has also coordinated several events, which include the following: the Holiday Toy Drive, the Acreage Fall Festival, the Acreage Music & Chili Festival, Food for Mustangs, the Army care package drive, Leukemia Society fundraisers and more.

Castro has also established himself in the athletic sphere. He was a member of Seminole Ridge High School’s varsity cross-country team, as well as the track and field team. Castro was named captain to both and currently holds the school record for the boys 4×800 relay. Additionally, he earned fourth place at a district track meet for the 4×800 relay.

In order to reach his goals of healing the sick and helping the poor, Castro will continue his academic career at the University of Florida. He will enroll in a pre-med curriculum with his sights set on graduate school. At that level he hopes to study biomedical engineering, neurosurgery or oncology. Castro stated that his life’s work will be dedicated to helping those who cannot afford the medical attention they need, and he will not give up until that goal is reached.

The Sam Budnyk Student-Athlete of the Year scholarship, established and first awarded in 2005, is presented annually to a graduating high school senior in a Palm Beach County public or private school, who has demonstrated outstanding achievement in academics, community service and athletics. An award of $5,000 the first year, a subsequent $5,000 is available for three consecutive years, for a total of $20,000 upon maintaining certain grade levels, other criteria and subject to fund availability.

The scholarship is administered and judged by a panel of diverse, competent and independent citizens, and is named in recognition and celebration of the commitment, values and success of Sam Budnyk, athletic director at Cardinal Newman High School for nearly 50 years, and head football coach for 43 of those years.

Funds for the award are generously donated by the presenting sponsor of the award, the Orange Bowl Foundation, and by individual and business donors. The scholarship is administered by the Palm Beach County Sports Institute.