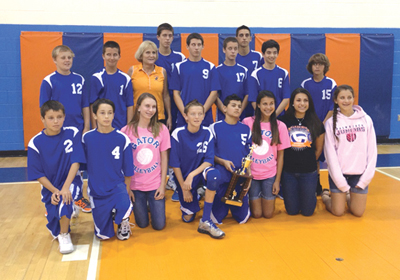 Outstanding blocking and hitting by eighth-graders Richie Ellis and Richie Green were crucial in the win. The defense was led by Ethan Shinn, Anthony Grnja and Giani Forgione.

Outside hitters Logan Peluso and Adam Aqua added hitting and serving power. The game MVP was setter Christian Shinn, whose leadership and athletic dominance were instrumental in the win.

In the past eight years, coach Maureen Witkowski has led the Gators to five Palm Beach County championships.