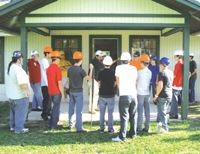 The Seminole Ridge High School Construction Academy took a break from a Habitat for Humanity project Tuesday, May 22 to work on the Indian Trail Improvement District’s Hamlin House, a residential home that is being converted into community space at Nicole Hornstein Equestrian Park.

Hamlin House, which is located at 89th Place and Hall Blvd., was a three-bedroom, two-bath home before being purchased by ITID when the park was expanded. Once the conversion is done, it will become a community meeting hall.

“One of our goals was to renovate the house and do something with it,” ITID Parks Department Director Tim Wojnar said.

Wojnar said that about 26 construction academy students participated in the project at the suggestion of Supervisor Ralph Bair, who made contact with Construction Academy Adviser Rick Terkovich, who agreed to participate.

The students, under the supervision of their teachers and a general contractor, began the demolition required before the remodeling could begin. Leading them were Acreage residents Bill Featherston and Mark Harris of William Featherston & Associates.

The students took down walls and drop-down ceilings and removed the kitchen cabinets, toilets, bathtubs, bathroom cabinets, light fixtures, carpet, tile and doors to open the house into one big room that can be used as a meeting place, Wojnar said.

“We’ve been working to get all the paperwork into place, contractors, making sure insurance requirements were met,” Wojnar said. “There were a lot of logistical things that went into it. We finally got that completed, and we began on May 22.”

Wojnar said repurposing the space is not a small project. “We’re going to make it an open meeting space, leaving one restroom,” he said. “They removed one wall from one of the bedrooms. One bedroom was left that will be used for a storage area.”

The kitchen was also removed except for one sink and a counter that will accommodate a microwave oven.

Terkovich said he was glad his students could help. “This is a great opportunity for the kids to learn how demolition is done,” he said. “The students thought they could just come in here and start swinging a sledge hammer. They now know that they have to have a plan to not only keep everything controlled but to keep everyone safe as well.”

Terkovich said the academy is in the middle of building a house for Habitat for Humanity and got bogged down in legal issues.

“We were looking around for something else to do, and Ralph Bair from the Indian Trail Improvement District called me up and said they have this Hamlin House that they want to turn into a recreation center,” he recalled. “I said that would be perfect for us because we’re looking for something to fill in before we start Habitat.”

Terkovich said he talked to the general contractor, who told him that what they could really use was help with the demolition.

“We took the walls out, we took the bathrooms out, so now they have one big meeting room,” he said.

The contractor will come back and put in a handicapped-accessible bathroom and finish the project.

Terkovich added that any of his students who want to earn community service points over the summer can help Featherston with putting the house back together.

“ITID is committed to supporting our community, and we are very excited this renovation is moving forward,” Supervisor Carlos Enriquez said.