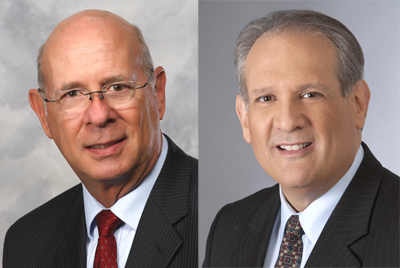 The Property Appraiser’s Office assesses property values, using state law and complex codes to place a value on each property, which then determines a property owner’s property taxes owed to the government.

With Palm Springs resident Charles Stahman also on the ballot, the nonpartisan race for the four-year term will be held during the Aug. 14 primary election. If one candidate gets more than 50 percent of the vote, he will win the election outright. If no candidate passes that threshold, the top two vote-getters will advance to the November election.

Nikolits said that voters should recognize his experience and dedication to the position when making their choice next month.

“I’m finishing my 20th year here,” he said. “But I’ve worked in this office for almost 33 years now. I understand what it takes to do this job.”

Nikolits, 62, was first elected to the office in 1992. A former real-estate appraiser, he spent almost 20 years in the tax-assessment field prior to his election, including 12 years working for the Property Appraiser’s Office. “This has been a perfect fit for me,” he said. “It allows me to use the skills I have developed and serve the public.”

Prior to his election, Nikolits also served on the Riviera Beach City Council for eight years.

Nikolits said that his top accomplishment in office has been being consistent and fair in his appraisals. “I have produced a fair and equitable tax roll for the last 20 years,” he said. “I have a team of highly qualified appraisers, and we have worked hard to do that.”

He said that if he is re-elected, he would continue to try to educate the public about his office and what its role is.

“I want to continue to provide the people of Palm Beach County with the best information I can as to how and why I do my job,” he said. “I want them to understand that this office is not responsible for taxes. Its responsibility is solely for the property valuation.”

With the county’s unique makeup, this can often be a challenge, he said.

Nikolits noted that although property values affect how much a person pays in property taxes, his office doesn’t set the tax rate or housing prices.

“Setting values of properties does have an impact on taxes,” he said. “I can’t set the market. I just interpret it.”

Nikolits noted that the office flies relatively under the radar most of the time, except when people get their annual property assessment notices.

“We don’t generate a lot of publicity,” he said. “People often forget about us until they open up their assessments.”

Unlike some other elected offices, Nikolits said that the property appraiser is not a clerical or ministerial position.

“It’s important that whoever the property appraiser is understands that this is not just a job where you can come in and post the numbers,” he said. “We have to generate and interpret the numbers.”

Nikolits said what sets him apart from his opponent is his experience and professional qualifications.

“To have been in this position and witnessed the [housing market] excel and then to see it collapse over six years, and to still be able to produce a fair and equitable tax roll is impressive,” he said.

Weinroth, 60, said that residents should choose him as a fiscally responsible candidate who will be an informative spokesman for the office.

Originally from Boston, Weinroth earned his bachelor’s degree in management from Northeastern University. He then went on to get his law degree from the New England School of Law.

He moved to Florida 20 years ago and, in 1999, opened a medical supply company with his wife, Pamela. He also spent several years as a small business consultant.

Weinroth has a long list of civic involvement but said he is particularly proud of his work with the Guardian Ad Litem organization, which represents children in cases of divorce, custody and other issues.

“The parents have their counsel, but we’re the ones who stand up and say what is best for the kids,” Weinroth explained.

He said that he decided to run for the office because he didn’t feel as though home values were lining up with perceived value.

“The time for me to get involved was just as good as any, if not better,” he said. “It’s a very important office. It affects us all.”

Weinroth said he feels that Nikolits’ office is spending too much money compared with other counties of similar size.

“I feel like there’s been excess money spent, comparatively speaking with counties like Broward and Brevard,” he said. “The average salary is way higher, by almost $15,000 to $20,000.”

Weinroth said that if elected, he would do more outreach.

“[Nikolits] has not been out there as much as I would be,” Weinroth said. “He is the spokesman for the department. Look at people like [Tax Collector] Anne Gannon, who are constantly out there beating the drum for their area, explaining the issues. You have to make sure people understand what goes into the dynamics of this office and what the numbers mean. My feeling is that the incumbent missed the opportunity to be out there and carry his message to the stakeholders.”

Weinroth also said he believes that the office should be more transparent.

“I have been to the Broward County Property Appraiser’s Office,” he said. “Things there are handled efficiently and transparently. People feel like they’re being treated properly.”

“I feel like when you come in for a service, you should leave understanding everything about your property valuation,” he said. “If ultimately you want to take it to the Value Adjustment Board, staff should work with you. It’s not their job to protect every bit of value. It’s for them to set it fairly and equitably.”

“I’ve talked with the [Palm Beach County] Sheriff’s Office,” he said. “If I am honored to be the next constitutional officer, the sheriff’s office will investigate for us the fraud and identify parcels that should not be exempt. Then we can go back and recoup the taxes owed. We will go after everyone who should have been paying their taxes. You and I shouldn’t have more of a burden because people are taking exemptions when they shouldn’t be.”

Weinroth said that his business experience would help him do the job.

“Running a business requires customer service skills,” he said. “My customers walk away if I don’t treat them fairly. I will work effectively to save taxpayers money, reduce fraud and provide customer service.”

He noted that in addition to his business and legal experience, he has taken International Association of Assessing Officers courses in appraisal skills and how to set value.

“I’m ready to dig in and take on this challenge,” he said. “I think I can do a credible job and save the taxpayers money, bring back additional tax dollars and take some pressure off the county government.”

Stahman, who does not appear to be running an active campaign for the post, did not return calls for comment this week.
Above: Incumbent Palm Beach County Property Appraiser Gary Nikolits (left) and challenger Robert Weinroth (right).