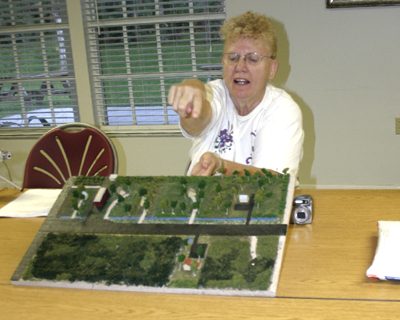 LGLA President Marge Herzog started it off, displaying models of a railroad that had been planned for Loxahatchee Groves. The models were constructed by longtime resident Ed Wallschlag.

“Ed Wallschlag had a very keen interest in model railroading, and I asked him, ‘Why do you have model railroads, and why is it called ‘Loxahatchee East and West?’” Herzog recalled. “Well, years ago there was a railroad right-of-way going through Loxahatchee.”

The right-of-way started at what would be Folsom Road a half-mile north of Okeechobee Blvd. and ran straight west all the way across Loxahatchee Groves. If it had come to be, it would have been a spur to haul produce to the main railroad lines, Herzog said.

The rights-of-way were bought over time by property owners whose land adjoined it. “Wouldn’t it be nice if the town could buy them back and turn them into an east/west trail?” Herzog said. “It went right across the whole town.”

Wallschlag was trying to figure out what to name his model railroad and decided on “Loxahatchee East and West.”

“There’s a hidden story behind that,” Herzog said. “If you just take the ‘LEW,’ it stands for Lois and Ed Wallschlag. He has given these four to us and asked us to keep them until such time as the town develops a museum.”

There are 10 more cars and an engine to the set, she said, explaining that Lois sets them up every Christmas. Wallschlag also constructed a model of Loxahatchee Groves.

“This is Folsom Road and F Road, and the black is Okeechobee,” she said. “The buildings are the Red Barn and churches, and over there is the Portuguese Center. He had a whole bunch of sections like this that he created, and he had sections for the whole town that he gave away to various people, but he always wanted to make sure Loxahatchee Groves has a section.”

Lois Wallschlag now lives in Baywinds. “She said that if anyone has any carambola, she would love them to give her a call,” Herzog said. “She said she comes out sometimes to visit because she does miss Loxahatchee Groves.”

Ken Johnson shared a folding handsaw that he got two for $5 at Lowe’s about 10 years ago that he keeps in his Community Emergency Response Team emergency kit.

“This is something that I would recommend for anybody who is a member of CERT,” Johnson said. “If you keep it in the package, you can throw it in your backpack so it will be handy if you ever need it. Just take it out of the case, and this is a saw for cutting rope, limbs, hose, wood. It’s collapsible and has a lock on it. You can use it in times of disaster out here. We’re there to serve and help people, and this can help us do our job.”

Bill Parker announced the birth of two calves, one a bull and the other of undetermined gender. “The mother wouldn’t let me close enough to check it out,” he said, noting that the births bring his herd to six. “They were born just a couple of days ago.”

Linda Heeraman said the 6,000 slash pine seedlings she and her husband, Sundar, bought about four years ago and planted on their 20 acres on B Road are about head-high now. She said they had committed to having another property with pine trees after the pines on their 37-acre property on Southern Blvd. became infested with beetles and had to be cut down. They subsequently sold the property and bought the B Road property.

“We planted the whole area with these trees, and we also gave some to the community to be able to give to other people to plant,” Heeraman said. “They keep us very busy trying to keep them clean from the weeds, because the weeds seem to grow faster than the trees.”

Pat Johnson said that her husband, Ken, who had complications after brain surgery, was her show-and-tell. After a month in intensive care in Pennsylvania and two months in a rehabilitation center and a month of rehab at home, he was able to drive to the meeting that evening. “A lot of support came from this room,” Ken Johnson said. “I appreciate that, and my wife does, too.”

Roy Parks, an amateur blacksmith, brought a pair of blacksmith’s tongs to show. “They really are legitimate blacksmith-made tongs,” Parks said. “They’re not from a factory. They really made their tools to be used.”

He said the jaws are flat but also have grooves to hold round or square material better.

Parks is a member of Community of Hope Church, where, at Christmastime, they re-create Bethlehem at the time of Christ’s birth, and he portrays a blacksmith.
Above: Marge Herzog talks about the “Loxahatchee East and West Railroad.”