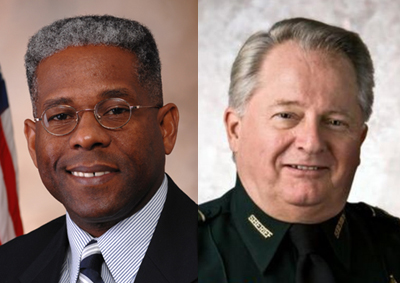 U.S. Rep. Allen West (R-District 22) faces a new district and a new challenge in Martin County Sheriff Robert “Bob” Crowder. Crowder and West face off in a District 18 Republican primary Aug. 14. The winner faces one of three Democrats vying for their party’s nomination.

The newly drawn Congressional District 18 encompasses Martin and St. Lucie counties on the Treasure Coast, as well as the northern third of Palm Beach County, including most of The Acreage and northern areas in Royal Palm Beach.

The district leans Republican but is considered one of the few swing districts in the state. The district’s creation must still overcome legal challenges, but the U.S. Department of Justice decided in April not to delay the election due to the lawsuit.

Allen West — West, 51, was born in Atlanta and is a third-generation military serviceman. For 22 years he served in the U.S. Army, earning honors such as a Bronze Star, three Meritorious Service Medals and three Army Commendation Medals.

In 2004, he and his family moved to Florida, where West served as a high school teacher for a year before returning to Afghanistan as a military adviser.

In 2007, he finished his assignment, and in 2008 unsuccessfully challenged incumbent Ron Klein for a seat in the U.S. Congress. However, he challenged Klein again in 2010 and won the District 22 seat covering parts of Broward and Palm Beach counties.

A conservative Republican, West is a leader in the national Tea Party movement. He quickly made a name for himself in the Republican-controlled House of Representatives, earning appointments to the Small Business and the Armed Services committees.

West said one of his top accomplishments in office was being the original sponsor of a bill that reduced costs at the Department of Defense. The bill passed 393-0 and was signed into law as part of the National Defense Authorization Act.

“Not too many freshman congressmen in their fourth month of service have a piece of legislation pass 393-0,” he said.

When redistricting left West in a seat that leans Democratic, he headed north to vie for District 18, which did not have an incumbent in the race.

Though he is running in a different district, West said he will continue to be a voice for maintaining waterways and other issues that residents of District 18 find important. “I will continue to represent pristine coastline,” he said. “People have come to count on me to protect our waterways.”

West said he has been a champion for small businesses but thinks the free market has been threatened. “We need serious economic and fiscal policy reform,” he said. “We have got to look at the over-regulatory burden placed on the free market. It’s strangling the economy.”

Energy independence is crucial, West said, pointing to an incident Monday in the Strait of Hormuz that has highlighted tensions between the U.S. and Iran.

He said that in the past 50 years, Americans have gone from using 18 percent foreign oil to 65 percent. “We have to become energy independent,” West said. “We have to get back to producing, consuming and maybe even exporting the full amount of energy resources we have here.”

And as there continue to be threats, West said he will focus on improving national security. “We have got to have a serious re-look at the 21st-century battlefield,” he said.

Though West has been criticized by his opponent for being too adversarial, he said that is simply a way to detract from the issues.

“People need to focus on the issues, not just on me,” he said. “Until I have an opponent who can articulate the issues, I really don’t care what he says.”

West believes voters should choose him because he has been a solid supporter of Republican values. “I have been a strong, leading voice for constitutional conservative principles,” he said.

Bob Crowder — Crowder, 66, is a Tennessee native who has served as Martin County sheriff for 20 years. In 1959, he moved to the Treasure Coast and graduated from Martin County High School in 1963. He has an associate’s degree from Indian River Community College and a bachelor’s degree from Florida Atlantic University.

Additionally, he is a veteran of the U.S. Marine Corps and a graduate of the FBI National Academy and Chicago’s Institute of Applied Science. Crowder and his wife, Debbie, have four children and six grandchildren.

Crowder has more than 47 years of law-enforcement experience, beginning in 1965, when he worked as a dispatcher for the Martin County Sheriff’s Office. He later served as a jailer and identification technician before becoming a patrolman for the Stuart Police Department in 1968. One year later, he became the city’s first detective.

In 1972, he was appointed Martin County sheriff for one year, before working in the private sector for another year. In 1974, he became the chief criminal investigator for the Martin County Sheriff’s Office, a post he held for almost 10 years before taking a position as undersheriff in St. Lucie County.

Additionally, Crowder has served on several commissions and boards, including as chairman of the Florida Commission for Law Enforcement Accreditation.

Crowder said he decided to run because he thought someone should challenge West on his decision to leave Broward to represent the Treasure Coast.

“We got a new district, and I was told the party was moving Allen West up here from District 22,” Crowder said. “I felt his confrontational style is not what people here are generally accustomed to.”

Though he has been criticized for a lack of experience in national government, Crowder said that he is a quick study who hopes to learn the issues and work to build consensus.

“Some people have criticized me for not being articulate on all the issues,” he said. “I’ve only pursued this in the last couple of months. My focus has to shift. But I’ve been successful in changing gears, learning new things and moving ahead, and I’ll be able to do that in Washington. I certainly have my share of distance to cover, but I have enough experience serving on commissions and boards to be able to do that.”

If elected, Crowder said his first focus would be working to stimulate the economy. “We have to work with other representatives to get the economy moving,” he said. “We are in a logjam against each other, and in the meantime, we’re not doing anything to get people back to work. The economy is stagnant.”

Another issue he hopes to tackle is the Affordable Care Act, which he notes has come under heavy criticism.

“I’m trying to avoid a strictly partisan approach,” he said. “We need to work to find what works regardless of political party. I don’t think we need to throw the whole thing out, but we need to eliminate the aspects that aren’t good.”

He said voters should choose him because he will work to represent residents through consensus.

“I’m not taking an ego along with me,” Crowder said. “I want to work with people, listen, evaluate and come up with answers that will work. I will focus on doing their business, not grandstanding. I think we need to be mindful that whether we agree or not, the public are our bosses. They are the people we are working for. Being in Congress requires serving everyone who is a citizen of your district, and I will do that.”