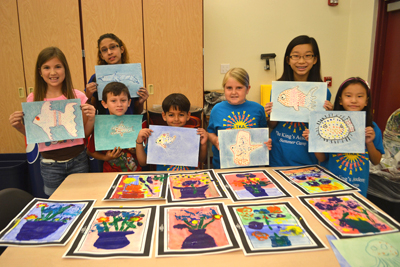 The King’s Academy’s Summer Camp participants have been enjoying fun activities, sports, field trips, educational games and crafts all summer. The camp’s theme is “Mission Possible,” based on Luke 1:37, “For nothing is impossible with God.”

Campers have been challenged both physically and intellectually as professional camp counselors build personal relationships through small group activities and daily den time. The Cubs den accommodates campers who are age 5 through second grade while the Lions den is for third through eighth graders. Campers have enjoyed Wacky Wet Wednesdays complete with slip-n-slides and water balloons, roller skating, bowling, movies and field trips to fun locations like Loggerhead Marine Science Center, Rapids Water Park, Leapin’ Lizards, the Palm Beach Zoo and Lion Country Safari. Campers interested in musical theater were able to display their talents during a week of camp titled “Musical Madness,” where campers each had a part in a musical that they rehearsed throughout the week and presented at the end of the week. Summer campers also had the opportunity to participate in a special week of art camp.

TKA has also been offering weekly sports camps for third through eighth graders including lacrosse, volleyball, track, softball, golf, tennis, girls basketball, baseball, football and cheerleading. Still to come this summer, TKA will hold sports camps for girls and boys soccer as well as boys basketball. During the week of football camp, participants were visited by two TKA alumni who were football standouts while at TKA. Class of 2007 graduates Emmanuel Lamur and his twin brother Sammuel were on campus visiting staff and faculty and took time to speak to the football campers.

The duo offered the participants some words of wisdom such as, “Keep God first in all you do,” and, “Have fun but work hard.” The brothers are recent graduates of Kansas State University, where they excelled on the Wildcat football team, leading them to a 10-2 season. Emmanuel is currently playing in the NFL for the Cincinnati Bengals, and Sammuel is being considered by both the NFL and CFL.

The King’s Academy is a nationally recognized private Christian school serving approximately 1,200 students from preschool through 12th grade and is accredited by the Southern Association of Colleges and Schools, the Association of Christian Schools International and the Florida Association of Christian Colleges and Schools. TKA serves students and their families across Palm Beach and Hendry counties at its main campus at Belvedere Road and Sansbury’s Way in West Palm Beach, its Clewiston campus on Caribbean Avenue, and its satellite preschool campuses in Greenacres, Palm Beach Gardens and Royal Palm Beach.

Above: Students in the art camp display some of their work.