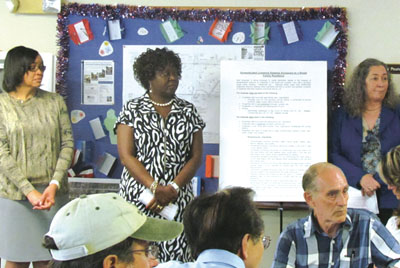 The office was packed with Acreage residents concerned about how the new rules will affect small lot owners with backyard livestock. The draft ordinance was criticized by ITID supervisors last month after it went before the Land Development Regulation Advisory Board.

According to Palm Beach County Planning & Zoning Director Rebecca Caldwell, the regulations now on the books place many residents in violation. The ordinance is to address many of the regulations by taking into consideration residents’ needs, she said.

The old regulations became an issue after residents made several complaints regarding livestock. One such case involved a Jupiter Farms woman cited for keeping roosters on her property.

Caldwell explained that the new ordinance would apply only to properties without a bona fide agricultural use or exemption, stating that the ordinance would protect property owners with residential principal/primary use in the rural and exurban tiers from getting citations if they keep livestock. Hobby breeders have a different set of requirements based on separate regulations, and this ordinance does not apply to them.

Caldwell said the ordinance defined examples of domesticated livestock, which include cattle, goats, sheep, pigs, llamas, alpacas, chickens and other fowl. “We tried to spell out the common domesticated animals, but we also got into questions about emus and ostriches,” she said, adding that broad language such as “including but not limited to” is used in the ordinance.

“What we are saying is that you can’t put an animal on a property line so that it becomes a nuisance to the adjacent property,” Caldwell said.

Permanent accessory structures for which proper building permits were obtained are not required to comply with setback requirements. “If you already have a structure that’s out there through proper permits, then you will be OK,” Principal Site Planner Barbara Pinkston-Nau said.

Caldwell added that there have been misconceptions as to the regulations regarding sheds, “that at one point in time they were not subject to permits when constructing new things under $1,000,” she said. “That limitation in the building code was for repair and rehabilitation, and it does not even include electrical or anything like that. Anything under $1,000 always did require a permit.”

Temporary or portable structures that don’t require a building permit can be located in the required front and side street yard as long as they have a 15-foot minimum setback from the side interior. “It can be a trough or some type of feeding mechanism they can move around,” Pinkston-Nau said. “We added this because folks had concerns that we were actually limiting the amount of property they could use.”

Several residents, along with ALA and ITID board members, were against the maximum number of six on-site animal sale events permitted in the ordinance.

Many argued that such a requirement hindered their rural way of life and livelihood. ALA Government Liaison Mike Erickson raised the concern.

“If someone does micro-farming, which is now one of the biggest sustainability pushes in this country, are you telling me that if they sell their neighbor a dozen eggs, that’s one sale and they are only allowed to do that six times?” he asked.

Caldwell replied that home occupational licenses don’t allow any retail sales on-site. “You’re allowed to do garage sales, a certain number of times a year, for 72 hours,” she said. “Right now, you’re not allowed to do any sales, so with this ordinance, we are going to give you six times.”

“Voice your consensus of what your landowners want,” he said. “I suggest you bring up your most important items, which is the number of sales, and I will back you up.”

The ALA decided to not support the ordinance until it does not limit the definition of what’s considered livestock and allows more than six on-site sales of livestock.
Above: Principal Site Planner Barbara Pinkston-Nau, Deputy County Administrator Verdenia Baker, and Palm Beach County Planning & Zoning Director Rebecca Caldwell listen to concerns.