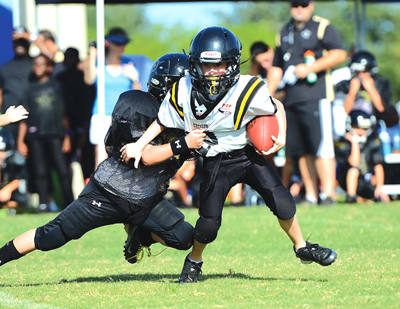 The Acreage Steelers Pop Warner Football Club traveled to Jupiter Community Park on Saturday, Aug. 18 to play in a series of pre-season scrimmages.

Other Pop Warner clubs participated as well, including the host Jupiter Mustangs, the Palm Beach Gardens Gators and the Parkland Rangers.

The Acreage Steelers are in their third season with the 70-year-old Pop Warner organization and have three full teams: the Tiny Mites, ages 5-7 and 45-75 pounds; the Junior Pee-wees, ages 8-10 and up to 105 pounds; and the Junior Midgets, ages 10-12 and up to 145 pounds. The local program has grown since its inception, and Bill Pennypacker, the club’s president, expects the program to expand more next season.

Last Saturday, the Tiny Mites squared off against the Parkland Rangers and the Palm Beach Gardens Gators. The Junior Pee-wees faced the Jupiter Mustangs Gold and White teams. The Junior Midgets also played two different Jupiter squads. All of the teams played on each side of the ball for 15 minutes, offense and defense. Scores were not tallied during the contests. The purpose of the scrimmage was for the teams to prepare themselves for the first game of the season. Prior to the scrimmage, teams practiced daily. Once the regular season starts, teams will practice two to three times a week.

The teams practice at Samuel Friedland Park in The Acreage, and play their official games at Seminole Palms Park in Royal Palm Beach. Negotiations are ongoing for an official field for the club within Acreage boundaries.

“Pop Warner has changed their rules this year to protect the players, making the game safer,” Pennypacker said.

Pop Warner has approximately 400,000 members nationwide and made the move to limit contact to no more than one-third of the practice. It’s the first youth sports organization to put a limit on contact during practice.

“The organization is taking concussions seriously with the rule change and making parents aware,” Pennypacker said.

According to Pennypacker, safer equipment is also on the way for Pop Warner. The league also has a mandatory play rule, in which each player must see at least eight plays of action during a game, depending on roster size. With the improvements on safety and awareness, the club is confident they will field more teams in the future.