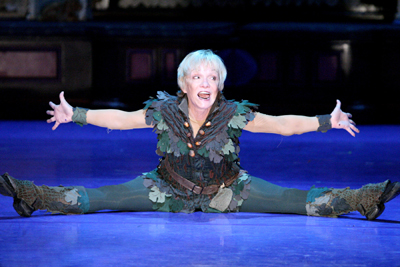 Audiences are invited to discover the magic of the two-time Emmy Award–winning and two-time Tony Award–nominated production Cathy Rigby is Peter Pan. Families and fans will have their chance to “fly” into the Kravis Center for the Performing Arts for this magical production now through Aug. 5. Tickets are now on sale to the general public.

Cathy Rigby is Peter Pan is a unique, family-friendly attraction of spectacle and fantasy. The thrill of flying, timeless magical moments and a captivating hook will mesmerize young and old alike. The legend you thought you knew is now the adventure you never dreamed possible.

Casale has been a resident for almost 23 seasons at the California Musical Theatre, where he has directed more than 550 shows. The flying sequence choreographer is Paul Rubin, a.k.a. “the Fly Guy,” who has choreographed some of the most memorable flying sequences from the Tony Award–winning Broadway production of Wicked, to Cathy Rigby’s Emmy Award–winning DVD Peter Pan. The creative team includes Patti Columbo (choreographer), Keith Levenson (musical director), Michael Gilliam (lighting design), Julie Ferrin (sound design), Sean Boyd (fight director) and Julia Flores (casting director).

Since 1990, Cathy Rigby is Peter Pan has made four stops on Broadway, garnering four Tony Nominations, including Best Revival of a Musical and Best Actress in a Musical. Other credits include the A&E network premiere of Peter Pan, which received four Emmy Award nominations and one Emmy Award, “The Historic All-Star Concert for Pope John Paul II” at the Los Angeles Coliseum, and the award-winning documentary on balancing wellness titled Faces of Recovery.

The Washington Post wrote, “Peter Pan sparkles with fairy dust! Rigby has mastered the boy who wouldn’t grow up.”

For additional information on the show, visit www.cathyrigbyispeterpan.com.

Above: Cathy Rigby in the role of Peter Pan.