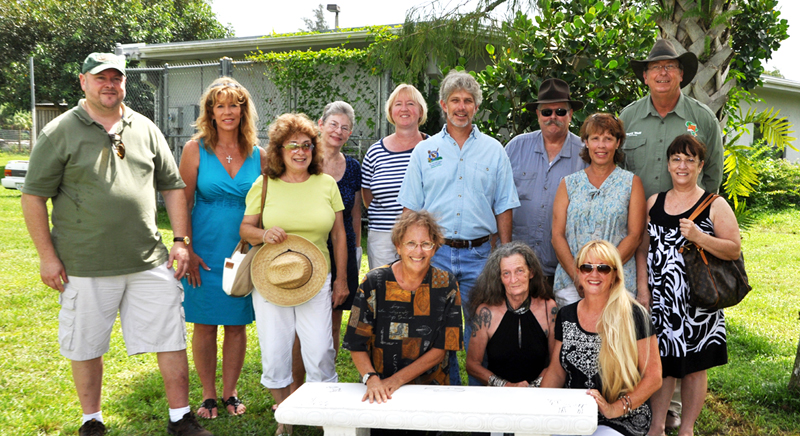 On Thursday, Aug. 23, about a dozen people gathered at Big Dog Ranch Rescue to celebrate two people who had dedicated most of their lives to helping care for injured and abandoned wildlife.

At 11 a.m., they gathered around a small memorial and shared memories. Then the ashes of Bonnie and Wallace Findlay were mingled with the dirt of the land where they had both lived and died. The hole was filled in, and the engraved stone was put back in place over it.

For nearly 30 years, Bonnie and Wally, who were half-brother and half-sister, ran the Bambi Bird and Wildlife Sanctuary on the 30-acre property at 10948 Acme Road, the last property on the left at the end of the winding dirt lane. That was long before Lowe’s and the other big-box stores were built, back when State Road 7 was a two-lane road cutting through empty scrub, citrus groves and cattle pastures.

Bambi reflected its rural surroundings. It was an overgrown, ramshackle jungle of a place, with cages and enclosures, many hand-built by Wally, set willy-nilly among the Australian pines. A flock of noisy peacocks strutted through the place, screaming a greeting to arriving patrons. Pelicans swam in the pool in their large enclosure, some awaiting release, some permanent residents due to crippling injuries. Bonnie never said no to any bird or animal.

Of course, Bambi has been gone for 15 years. A fire swept through the sanctuary early on the morning of Tuesday, Feb. 4, 1997, destroying the mobile home where Bonnie and Wally lived, and damaging the garage where they did most of their work. Most devastating of all, Wally perished in the fire, dead of a gunshot wound to the head; self-inflicted, said the police report — a verdict no one who knew him ever accepted. Bonnie died three years later, on March 4, 2000, of cancer.

Before her death, Bonnie partnered with the Folke H. Peterson Foundation, a charitable trust, and a new wildlife center grew out of the ashes of the old one. The Folke Peterson Wildlife Center opened in 2004, having cleared the land and all the old cages and built a new building and habitats. It closed its doors five years later, in the summer of 2009, and for two years the land stood vacant, until Big Dog Ranch Rescue opened there in 2011.

“We are honored to have Bonnie and Wally’s ashes here,” said Lauree Simmons, president of Big Dog Ranch Rescue, who also attended the service. “We’re very thankful to Bonnie, who started this place where we now save so many dogs. Hopefully, we’ll keep saving animals here.”

“I’m happy Bonnie and Wally are finally back home where they belong,” said Sue Shearouse, a good friend of Bonnie and the person who brought her and the Peterson group together. “Burying them here was seriously overdue.”

“It has been a long time coming,” agreed Joni Goodine. “I’m glad my friends and mentors are home.”

The group shared stories of the people they’d known and loved. Charlie Dennis, who had been a Florida Freshwater Fish and Game officer and the bane of Bonnie’s existence, recalled stories of some of their altercations.

“I never hated her, though she hated me,” he chuckled. “I just wanted her to do right by the animals.”

“Bonnie was a pioneer in Florida rehabbing,” said David Hitzig, executive director of the Busch Wildlife Sanctuary in Jupiter. “She wasn’t shy. She’d tell you exactly what she thought.”

“We’ll never see their like again,” added Barbara Perrone, who took care of Bonnie after the fire and helped revamp the burned-out garage into the house that still stands on the grounds.

“They were really something,” said Sandy Lewis, a friend and fellow rehabber.

“Bonnie was a hoot,” said Carl Breithaupt, their nephew.

Carl and his wife, Julie, came down especially for the ceremony. He shared stories about his Uncle Wallace playing with him and his sister when they were kids, and about how Wally would visit during his shore leaves from the U.S. Navy and Merchant Marines.

“He’d get down and wrestle with us and give us rides like he was a horse,” he recalled. “Aunt Bonnie was not like that. One time I sent her a thank-you letter for something she’d sent me, and the next time she called, she corrected all the grammatical errors I’d made in the note.”

And I was there as well. In fact, the whole ceremony grew out of a project I’d been working on for more than a year: writing a book about Bonnie, Wally and Bambi.

They had been good friends of mine. I spent many days volunteering at Bambi, learning from them and getting to know them. After they both died, after the center was gone, it irked me that they seemed to have just vanished when they had given so much to the people and animals of Palm Beach County. It just didn’t seem right.

In tracking down information and interviewing people, I stumbled across many mysteries and uncovered all sorts of unexpected findings. When I finally located Carl, Bonnie and Wally’s nephew, he provided a treasure trove of documents and memories. His mother, Terry, was Wally’s sister and Bonnie’s half-sister. In fact, Carl still had their ashes, undecided what to do with them.

“Listen,” I told him. “You’ve held them this long. Hold onto them a little longer, because with any luck, we’ll get them buried back at Bambi.”

It took cajoling, begging, waiting and hoping, but it finally happened. Bonnie and Wally came home for good, back to the land where they both lived and died, back where they wanted to be.