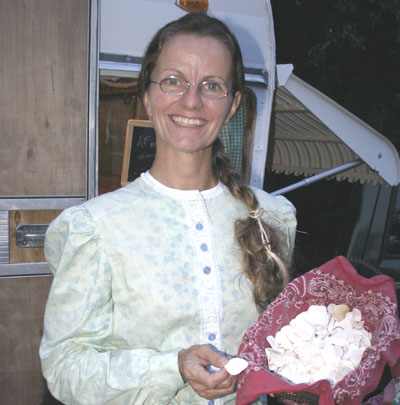 Dressed in a flowered cotton long dress and blouse in the style a pioneer woman might have made for herself, Gina Sauber of Loxahatchee Groves focused on early lifestyles of Floridians in her presentation “A Time Remembered” last week at the Aug. 23 meeting of the Loxahatchee Groves Landowners’ Association.

A 10-year volunteer at Yesteryear Village at the South Florida Fairgrounds, Sauber has been making presentations independently for about two years. More recently, she has started pulling along her “portable museum” created from an old camping trailer.

“I spent two years refurbishing her,” she said. “I brought her back from the dead.”

At first, Sauber was going to use it for camping, but decided to create her mini museum, which she finished in April.

“I do a lot of presentations, and I have lots of stuff to carry,” she said. “I was getting a little too old for this, so I thought I’d turn it into a little mobile learning center.”

Then again, Sauber herself is like a mobile learning center, carrying the tanned skins of a fox, a coyote and an alligator.

“I like hunting, and if you get me talking about hunting, I’ll never shut up. This is a coyote, the first coyote I ever saw. You can see where I got him,” she said, pointing to a hole in the dressed skin. “Some people don’t like hunters, but I say if we didn’t take these coyotes, they’d be taking your dogs and cats.”

Displaying her fox skin, she said: “You’ve seen foxes running across the road. Well, this one didn’t make it. I was not too far behind it. I scooped him up, threw him in my car, threw him in my freezer, and a friend tanned his hide for me.”

She passed around a basket of alligator “scutes,” the network of bones running the length of an alligator’s back, and invited everyone to take one. Then she explained the alligator hide.

“This one was a roadkill,” she said. “They gave me permission to take roadkill for a while, but they have taken that away from me. They don’t want everyone to think they can get permission. All those bumps along the back are individual bones called scutes. There’s 144 scutes on every alligator.”

Aside from serving as a coat of armor, the scutes also heat up the coldblooded alligator’s body as it suns itself. “This dark skin helps draw the heat in, and this is the bone that’s under that dark skin,” she said. “It’s also an armor plate that helps protect alligators from other alligators.”

Sauber had been on an alligator hunt the night before her presentation and caught one that had only three legs. “They’re always eating each other,” she said.

She won her first alligator harvest permit, which the state awards by lottery, in 2005.

“I requested Lake Okeechobee, and my first attempt, I got lucky,” she said. “My first alligator was an 11-and-a-half-foot alligator. He’s hung over my fireplace. My air-conditioning guy came in a few years later and said, ‘Boy, did your husband get that?’ I said, ‘No, that’s my alligator.’ That shut him up right quick.”

Sauber and the LGLA attendees then moved to the trailer, where fiddler Jim Waldeck played some bluegrass mood music as Sauber poured lemonade for everyone.

Sauber said she loves teaching children how things were in Florida’s pioneer days and how people had to hunt for their food. “It’s all about teaching children and calling their attention to nature and the outdoors,” she said.

Holding a pine branch damaged by lightning, she explained that it is “lighterwood,” which was cherished by pioneer families for kindling fires because of its high resin content.

Sauber also has a cypress knee that she was able to get after a homeowner illegally destroyed a stand on his property. “You can’t legally cut cypress knees,” she said.

Using a raccoon skin, she explained how her stretching boards are used to treat hides during tanning. “I got these from Wisconsin this summer,” Sauber said. “Picture me carrying these two boards through the airport. My cousin up in Wisconsin, his dog got his first coon, and he donated it to my program. The coons up there are so much darker than the ones down here, I guess because it’s so much colder up there.”

Other items on display include a Brahma bull skull, a chamber pot and turkey feathers from wild turkeys she shot herself. “When I take a turkey, I don’t just take the meat,” she said. “I recycle everything. I don’t just hunt an animal and pop out the breast meat. I recycle the feathers, everything I possibly can.”

Sauber also displayed primitive toys made for pioneer children, including yo-yos and a stereo optic viewer. Holding a stuffed toy recognizable as a horse, she said pioneer children were able to amuse themselves with such toys.

“Back in the day, children would spend hours making horsey noises,” she said. “This is what they used to play with. I ask children if they could play with this, and they say, ‘Oh yeah,’ but probably not as long as children did back in the day.”

Asked whether she had read the book A Land Remembered by Patrick D. Smith about three generations of a pioneer family in Florida, she said she had. “I have it here inside,” she said.

Sauber added that on Nov. 10, Yesteryear Village will have an event called “Sip & Stroll,” when historian and author Harvey Oyer will give a lecture on his books, including the bestselling children’s book The Last Egret, a story about the adventures of a young Florida pioneer named Charlie Pierce.

Above: Gina Sauber with a basket of alligator scutes.