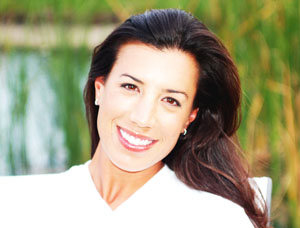 Melanie Peterson is asking voters to choose her in the Republican primary for State Senate District 25 and give her a shot at going up against the Democratic candidate, State Rep. Joe Abruzzo (D-District 85).

Peterson faces attorney Geoff Sommers of Boca Raton in the Aug. 14 primary. The winner will face Abruzzo in November.

“I have the experience, and the connection to the community,” she told the Town-Crier. “I know the difference between The Acreage, Loxahatchee Groves, Wellington and Royal Palm Beach. I’ve lived in almost every one of those communities, and I understand their individuality. I understand the nuances of each community and who their residents are.”

The newly drawn District 25 takes in all of the western communities while encompassing most of western Palm Beach County, starting in the northwest at Lake Okeechobee, cutting east through Palm Beach Gardens and then back west, south through Wellington into western Boca Raton, and west across to Belle Glade.

Peterson is a 25-year resident of central Palm Beach County. A graduate of Santaluces High School, she has a bachelor’s degree from Florida Atlantic University and was a Marshall Fellow. In 2002, she co-wrote a booklet about agricultural best management practices in South Florida as part of the fellowship that brought her notoriety in agricultural circles.

For the past decade, she has volunteered with the Florida Farm Bureau, serving on its Equine Advisory Board for eight years. She is a member of the Young Farmer and Rancher Leadership Committee. In 2006, she was elected to a seat on the Palm Beach Soil and Water Conservation District Board of Supervisors.

Peterson has spent 18 years in the equestrian industry, working as a trainer, Realtor and founder of a marketing and equestrian sales web site. She began riding through her work with the Vinceremos Therapeutic Riding Center. Peterson has served as a board member of the Palm Beach County Horseman’s Association and the Loxahatchee River Management Coordinating Council.

Peterson said she wants to be a voice for the county, which many people don’t realize is heavily agricultural.

“Through some of my experiences as a volunteer, I have been involved in policy implementation regarding South Florida,” she said. “I was encouraged to consider running for election because we don’t have enough representation that understands our county.”

If elected, her No. 1 goal would be to bring jobs to the area, especially the Glades. “I’m concerned about the Glades,” she said. “They have a 40 percent poverty rate out there, and I don’t know that anyone is really paying attention to what goes on out there.”

She said residents have a vested interest in seeing improvement in that community.

“Beyond the human interest, it should matter to residents because it’s costing the county a lot of money,” Peterson said. “They are not able to pay for their own services. We need to pay attention to them and get industry and job training out there.”

Peterson said she supports the proposed inland port and that in her time spent with residents, she got a real look at how the community lives. “I had really interesting conversations,” she said. “A lot of them want job training. They’re concerned about their kids. It gives a face and picture to some of these issues.”

Peterson said she’d like to work to encourage companies to locate in the area in order to help the community. “We not only want to help get them on their feet, but we want to help them do better for themselves,” she said. “They want to work; they just don’t have work.”

In general, she said the state legislature can help create a business-friendly environment to attract jobs to the state.

“We have to reform business regulations, cut corporate taxes and make Florida a more business-friendly environment,” Peterson said. “Then we have to have an affordable living and a good education system.”

Another issue Peterson hopes to tackle is property insurance. “We’re seeing the [real estate] marketplace recover, but homeowners’ insurance continues to be a real issue,” she said. “Let’s talk about rate modeling. Let’s talk about risk mitigation. Let’s get to the heart of the situation.”

In the area of education Peterson wants to see the state make “bold moves.”

“We have to, so we can be competitive,” she said. “Everything goes back to jobs. You need a good education system in place for employers to want to come here.”

Though she noted that everyone has a different opinion of what “central” Palm Beach County is, Peterson said she thinks parts of the community have been overlooked.

“The chunk in the middle has been kind of abandoned,” she said. “We’re not seeing that much infrastructure being developed. Rather than continue to plow over fruitful farmland and build more houses out west, I’d like to see them revitalize some of central Palm Beach County.”

While many people believe the newly drawn district gives Abruzzo, the Democratic nominee, an edge, Peterson does not believe that is accurate.

“The shining star is the 26 percent independent vote,” she said. “I think I can speak to independents. People are ready for a change. They want a real representative in Palm Beach County.”

Peterson stressed that she has roots in the community. “I know what it’s like to live here,” she said. “I have my finger on the pulse of this community. I wasn’t born with a silver spoon in my mouth; I know how to make something from nothing.”

Though Peterson classifies herself as a conservative, she said that she has often been able to bring people together from all sides of an issue. “I’ve always been able to work across the board with different kinds of people to bring them to the middle,” she said. “I like to discover what everyone can agree on, and what we can do to work together.”

Peterson described herself as a highly principled person who is not easily dissuaded from her goals. She said she hopes voters will recognize her experience and her drive.

“I understand where this community has been and where we want to go,” she said. “I listen. I want to hear from people and be a voice for this area. I think we have been grossly underrepresented.”