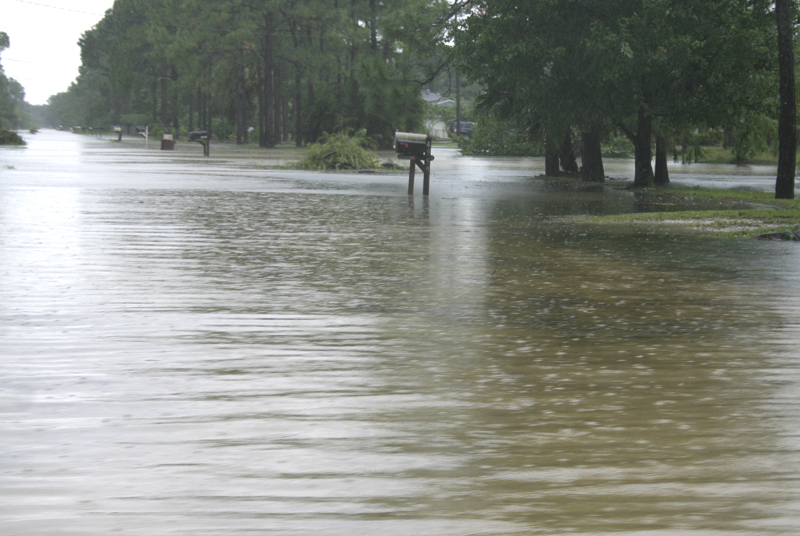 More than a foot of rain from Tropical Storm Isaac brought flooding throughout the western communities — especially in The Acreage.

As of Wednesday night, many parts of The Acreage remained inundated with standing water.

Indian Trail Improvement District Administrator Tanya Quickel said relief should be coming soon now that ITID has gotten permission from the South Florida Water Management District to release more water to the south, and also from the City of West Palm Beach to pump into its M-1 Canal, which empties into the city’s water catchment area.

“We’ve installed temporary pumps to discharge into the M-1 Canal,” Quickel told the Town-Crier Wednesday. “That’s new discharge we did not have. We also have 100 percent additional discharge from the road to the 40th Street structures where the M-1 Canal is, thanks to working with the Village of Royal Palm Beach and the South Florida Water Management District.”

Quickel said that ITID staff closed a berm separating 40th Street from the M-1 Canal that is believed to have been opened by residents. The road washed out as a result, but Quickel said ITID staff was on the job. “The breach has been stopped, but… road repairs go with it,” she said, adding that the work is continuing.

Three pumps were running this week at the J.W. Corbett Wildlife Management Area to the north of the community to lower the water level there and try to avoid a possible breach in the dike that separates Corbett from The Acreage.

“The goal is to relieve some of the pressure because they, of course, received a great deal of rainfall as well,” Quickel said.

She added that both her district and the SFWMD were monitoring the berm along the Corbett area, adding that supplies have been stockpiled close by in case something more catastrophic occurs. As of Wednesday, there was only some minor seepage, which is common.

“Our water levels are equally high on our side, so it’s actually in equilibrium right now on each side of the berm,” Quickel said. “We are watching that.”

Quickel said it would probably take several weeks to get all the water out of The Acreage. “The paved through roads are much improved over the last few days,” she said. “There are some that are still problematic, but they have gotten better. We are starting to see some improvements on the quarter-mile roads, but that is where the biggest challenge is next, to get those drained. We are working hard, continuing our discharge to the west as well as the south.”

ITID is also working with the school district to get Acreage children back in school. On Wednesday, all Palm Beach County schools opened except eight, including all those in The Acreage.

“They are probably going to be closed tomorrow [Thursday] because children cannot safely get from their homes to the school buses, and a lot of people are still trapped in their homes,” she said. “They can’t easily get out to get their kids to school or to go to work, so they’re talking with us as we make progress reducing the flooding.”

While the vast majority of homes in The Acreage were spared water intrusion, some houses have flooded.

Quickel said the county Emergency Operations Center has been working to help people who are unable to get in and out of their homes and need assistance. “They have a rescue unit that has been assigned to help with that,” she said. “If it’s a life/safety issue, they are asked to call 911 for the emergency services to respond and help with that.”

She stressed that only a few homes were flooded. “There are some; [but] there are many more that the water is up to or very near their homes,” Quickel said. “It is the street flooding that is more prevalent, than actual flooding of the interior of the homes.”

Quickel noted that Gov. Rick Scott flew over the area Wednesday morning to assess the damage. “He received a briefing from the South Florida Water Management District that clearly showed the severe impact of the amount of rainfall over such a large area, and multiple places that were impacted, the Village of Wellington, Royal Palm Beach, us, Loxahatchee Groves, and the challenges faced for all of our discharge. It’s just more than these systems were designed to store and be able to convey quickly,” she said.

Quickel added that there was a lot of discussion about the Corbett area and the berm, so state officials understand the potential risk of a dike failure, as well as ITID’s limited authorization to discharge to the south.

“He seemed very aware and keenly concerned about the residents and their ability to be able for children to get to school and for people to return to work and their safety with that,” she said. “That was helpful. We’re looking for long-term solutions, which are not inexpensive, to address these issues. They’ve been around for decades. Indian Trail has asked for additional discharge for decades, additional storage; we’ve discussed the berm many, many times in the past. It really is critically clear now how important those changes are from what just happened.”

While governments work to clean up, some inundated residents are angry.

James Varvaro, a 25-year Acreage resident, said he thinks changes need to be made at ITID.

Varvaro said he believes residents need to get together and coordinate their efforts for emergency management. “When you call up, everybody says, ‘It’s not my problem,’” he said. “The bottom line is, instead of building these parks, they need to secure our communities so we don’t get flooded out every time we have a major storm. We spend a lot of money on the feel-good stuff and not enough on the necessary stuff.”

Loxahatchee Groves Water Control District Chairman Dave DeMarois was leading the recovery efforts there instead of District Administrator Clete Saunier, who was out of town.

DeMarois said most of the lettered roads in Loxahatchee Groves were passable but not dry as of Wednesday night. Last Friday morning, he participated in a conference call with the South Florida Water Management District and other affected agencies. “At that time they assured us that it would be 3 to 6 inches of water, that’s it,” he noted.

It will take a while before all the standing water is out of the Groves. “We’re in the process of trying to keep the canals free where the water flows, but we have so much water draining from properties that they’re staying pretty high,” DeMarois said, explaining that flooding is the worst in the north end because all the drainage is to the south.

DeMarois said he personally fielded many of the complaints. “Everybody has been saying we’re doing a lousy job, but we don’t mind that; we can document our job and we’ll take blame for it if there’s blame due, and we’ll take credit if there’s credit due,” he said.

Some homes in Loxahatchee Groves have flooded, but DeMarois did not have a definite number because, he believed, most of them were coping on their own. He urged people with flooding problems or whose property was destroyed to contact the Town of Loxahatchee Groves, which is keeping records of the damage.

Attorney and Loxahatchee Groves resident Andrew D. Stine said people have contacted him who were adversely affected by the storm.

“I believe, as the people believe who have been adversely affected from the flooding, that it was because of Indian Trail’s inability to properly pump the water out of their location,” Stine said. “I believe that has caused the flooding and the damage to the homes throughout the western communities.”

Stine noted that most of the insurance residents carry is for hurricane and not flood damage.

“They have a right to be redressed because the government entity, Indian Trail, did not fulfill their obligation to the citizens, and it is a taxing district, so they have an absolute responsibility to protect these people’s homes, their chattel, horses, livestock, even chickens, also protect their landscaping equipment and their plants,” he said.

Palm Beach County is using the county’s automated call system to ask residents about flooding damage to their homes. The message will ask residents to call the county’s information center at (561) 712-6400 to report how much flood water has entered their home and whether they carry flood insurance.

This information, officials said, is necessary to conduct damage assessments resulting from Tropical Storm Isaac. Residents who do not receive an automated call but have had water enter their homes should call the number immediately.

Above: A road leading off Persimmon Blvd. is covered by storm water, flowing into the adjoining yards.