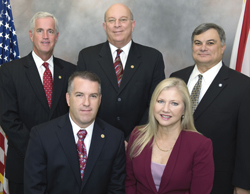 In an attempt to clarify a decision made last month, the Grille Fashion Cuisine was subjected to additional conditions Tuesday in a move that Vice Mayor Howard Coates labeled “anti-competitive.”

The change, clarified by Councilman John Greene, revokes the restaurant’s designation as a cocktail lounge and thereby requires it to comply with state requirements that 51 percent of its daily income be from food and not alcohol.

The council split 3-2 on the change, with Coates and Councilwoman Anne Gerwig opposed.

In August, the restaurant came before council requesting a conditional use permit to be labeled a cocktail lounge, as well as extended hours of operation.

But Greene said that he believed there was confusion over his motion, which he said was to grant the extended hours of operation, but not the cocktail lounge designation.

In a letter to council members, Greene requested the item be put back on the agenda, but not open for public hearing. “The applicant has presented to council and the public has already been given the opportunity to comment,” he wrote.

Greene said he wanted to amend his motion to clarify it, as well as remove the requirement that the village be able to audit the restaurant annually.

Avery Chapman, attorney for the applicant, was ultimately given a chance to speak. He said that the change was unfair. He noted that other restaurants, such as the Players Club, have been given similar designations, and are allowed open later. “The restatement of the motion effectively eviscerates 50 percent of what we asked for,” he said.

The change could affect the restaurant’s ability to stay operational, he cautioned. He noted that the owners were pro-active in seeking out a designation so to avoid problems.

Owner Juan Gando told council members in August that the conditional use would be necessary to operate under the state’s license — which cost $80,000 — and to be competitive with restaurants like the Players Club, which are open later.

Chapman called on Greene to recuse himself from the decision due to his relationship with Players Club owner Neil Hirsch. “Given the stated relationship, and given past recusals, I urge you… to recuse yourself,” Chapman said. “I think that it offers the appearance of impropriety.”

Greene admitted that he has been a friend of Hirsch for 30 years, but said that he does not stand to gain financially from the relationship. “Our relationship is not business related,” he said. “I have consulted with our attorney and sought outside opinions. There is nothing in anyone’s opinion that poses a conflict. I have no intent of recusing myself.”

Coates said that when he seconded Greene’s motion in August, he believed he was granting the Grille a cocktail lounge designation.

“I thought it would be the same thing we did with the Players Club,” he said. “If that wasn’t the motion, there would have been no reason for the village to require that we audit the food and beverage sales.”

Greene said he tacked on the requirement because it came from the Planning, Zoning & Adjustment Board.

Coates said he felt that Wellington would be giving a competitive advantage to the Players Club if they didn’t grant the cocktail lounge designation to the Grille.

But Greene said there was no reason to compare the two. “It’s like comparing apples to oranges,” he said. “Where the Players Club is located and where other restaurants are located is very different than the [area] that the Grille is located in.”

Coates disagreed. “To suggest that there is any meaningful difference between the commercial and the competitive environment of the Players Club and the Grille is disingenuous,” he said.

He noted that the Players Club already benefits from having later hours of operation. “I cannot come up with a justifiable reason why we would treat one business different than another,” Coates said.

But the majority disagreed, and Greene’s motion carried 3-2 with Coates and Gerwig opposed.