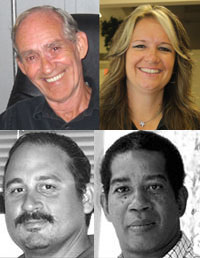 From now until the election, the Town-Crier will ask questions each week to the four Indian Trail Improvement District Board of Supervisors Seat 2 and Seat 4 candidates. This week’s question: How do you rate ITID’s response to Tropical Storm Isaac and what, if anything, should have been done differently?

Tropical Storm Isaac caught the whole region off guard. The 16-plus inches of rain that it dumped on the district overwhelmed our drainage system. But with that said, I feel we can learn from this event and improve our drainage system. With comprehensive analysis and studying of all the data our telemetry has provided, we can paint a picture of the storm and our performance. Let the chips fall where they may; I am looking for long-term solutions. We can no longer live with a quarter-inch outfall that we are permitted by the South Florida Water Management District. We need alternatives to our current outfall. I feel agreements with neighboring municipalities for increased discharge is just one of the ways we can achieve this.

I feel the post-recovery effort was thinking outside the box. We developed plans as we proceeded with the recovery. One part of that was reaching out to our neighbors, the Seminole Improvement District, West Palm Beach, Cypress Groves/GL Homes and Royal Palm Beach for additional discharge. The steps taken and the help we received allowed us to drain the district in a week.

One important lesson we learned was the precarious situation we have with the M-O Canal, which borders the J.W. Corbett Wildlife Management Area. The elevated water levels on the Corbett side, 23-plus feet, kept us on edge for days. It was precise coordination between ITID and SFWMD that averted a much worse situation from arising.

Moving forward, we need to improve our response, preparation and our infrastructure. We need to find solutions that mitigate flooding in the future.

During the recent flood event, the Indian Trail Improvement District did not prepare. The massive street flooding was avoidable. ITID is on a four-day workweek, and they went home on Thursday. In recent years, ITID has lost its mission, which is drainage and maintenance of roads and canals.

Our canals are not only for flood protection, but they are also a water resource to help recharge our aquifers and maintain our well integrity and canal systems; if you drain too much, the canal banks deteriorate, and the result is clogged culverts. ITID needs to focus on protecting the residents’ resources and roads.

ITID’s core mission is maintaining roads and canals. As a board member, it will be one of my responsibilities to set policy where our engineers and crew remember why they are here, learning to identify the problems and fixing them. Our drainage system works, but you have to have people maintaining the system. The system is being neglected, and a few changes are in order. Having key people who take direction and fulfill their duties is what we need now.

That is what’s missing at ITID. I feel that I can make a difference leading us to a future where we do not have the flooding occur and our residents are protected from conflicting agendas. There are very few places left in Florida where the water is as good as it is here. We need to keep protecting our community and its resources above all else.

How would I rate ITID’s response to the storm? “F” for fail is how I rate it. They need to hire the proper people to maintain the water levels who have an educational background in water management.

Before a storm, they should have a pre-storm draw down, which was not done. If they had done that, we still would have been flooded, but not as severely.

Everyone saw the storm coming our way, and the other areas in the same storm line were also being flooded, which should have been an indication that something needed to be done. Most important is the canals have not been cleaned out for more than two years and need to be dug out to the proper depth.

By the way, Callery-Judge did not flood; they did the right thing, and they were in the middle of The Acreage. ITID did not have an emergency plan set up and were trying to take care of things after the storm instead of before the storm. As a result, many people lost everything they had and in some cases had to live in motels.
There was no emergency meeting called by the board after the storm. There should have been a board meeting called on how to handle the situation.

First on my agenda is to clean out the canals and set them to the original depth, and go over all pump systems and bring them up to date. ITID should listen to the residents!

Tropical Storm Isaac was 435 miles away and over 700 miles wide. It was predicted to drop between 4 to 6 inches of rain. A few weeks prior to Isaac’s arrival, the district received numerous complaints from residents that ITID was holding its canal levels too low during hurricane season. Indian Trail dropped its canal levels to controlled levels in preparation of the storm.

Unfortunately, part of the storm stalled right over us, and The Acreage received over 18 inches of rain. We were severely flooded. Almost two years prior to Isaac, on Sept. 17, 2010, when discussing the Corbett area, the Palm Beach Post quoted me: “There is going to be a day when a storm is going to catch us off guard and our residents will be in danger.” Our greatest fear became a factor. What should have been a flood storm that would have lasted two to three days of flooded waters became a weeklong event due to the seepage directly from the Corbett area. Portions of The Acreage were flooded for almost one week, which is unacceptable.

From every tragedy comes good. I believe with the support of the governor’s office, we’ll see significant changes in Corbett for flood prevention. I believe with some interlocal agreements, we’ll get the discharge that we deserve. ITID needs to focus on its internal canal system, and the district needs to work with our neighboring communities on partnerships that will allow us additional discharge and water storage during the wet season. It will take our community working together collectively to accomplish this.