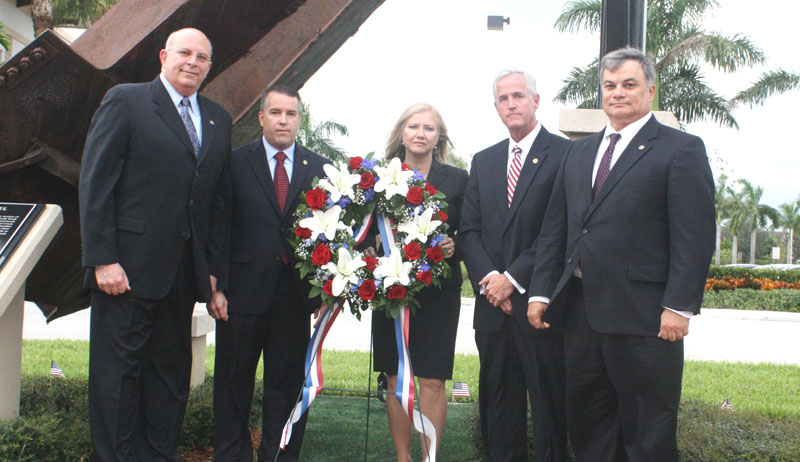 Wellington commemorated the Sept. 11, 2001 terror attacks Tuesday with a ceremony in front of the Patriot Memorial.

Village officials spoke of the tragedies, and the crowd participated in a moment of silence before a wreath-laying ceremony.

“On this day, 11 years ago, terrorists struck at the very core of our American way of life,” Wellington Mayor Bob Margolis said. “We are gathered here today to convey our deepest sympathy to the families impacted by 9/11.”

He said that we as a nation must continue to honor those who were lost that day, as well as those who continue to serve our country.

“We gather to honor the memory of the courageous first responders — police, firefighters and emergency medical personnel who came to the rescue, in many cases losing their lives in order to save others,” Margolis said. “We thank all of the members of our military for battling terrorism. Across our country, we thank our first responders who risk their lives to keep us safe at home.”

Vice Mayor Howard Coates said that the day is a way to unite the country. “One of the great things about this country is that no matter who you are or where you’re from, we all are patriots,” he said.

Wellington recently sent a brick from its memorial to Michael Bloomberg, mayor of New York City, who thanked the village with a letter, Coates said. He read the letter to the crowd.

“The support that we have received from our fellow Americans and the international community really has been amazing,” Bloomberg wrote. “As we continue to honor the memory of all those we lost on 9/11, I appreciate your thoughtfulness and generosity.”

Councilwoman Anne Gerwig said that although many wish the day had never happened, we cannot forget those lives lost. “It changed our country forever,” she said. “We all remember where we were at that moment when we realized that we weren’t safe anywhere.”

She said that although the day made her reflect on how it changed her life, she said she felt that was insignificant compared with those lives it touched more directly.

Many of those lost that day, Gerwig noted, were innocent people who were going about their everyday business.

“I would like for us to think about the men and the women, the brothers and the sisters who went in to work that day,” she said. “Whether they went to work in an office, or they were serving food at the top of that building, they were pursuing the American dream, and they were all patriots.”

Councilman John Greene told the crowd that even through such tragedy, the American spirit has endured. “Today we are able to put aside our differences and remember that we are Americans,” he said. “We will come together, and our resolve will never be broken. A senseless act of terror… doesn’t change who we are.”

Councilman Matt Willhite, who spearheaded the Patriot Memorial project, said he was glad to have a special place for residents to gather and remember those lost.

“This piece of steel only represents one aspect of that terrible day,” he said. “There were the lives lost in Shanksville, Pa., and at the Pentagon. We’re here to remember every life that was lost that day. As a country, and as a community, we come together to remember.”

By commemorating the day, Willhite said, those lives were not lost in vain. “It’s the spirit inside each one of you that reminds us of who they were and carries their legacy on,” he said.

Above: Wellington council members lay a wreath at the memorial.