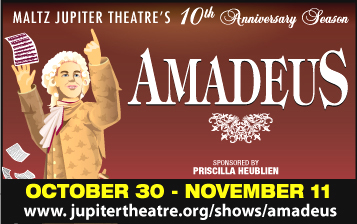 One of the greatest composers of all time, Wolfgang Amadeus Mozart was outrageous, brilliant, complicated and larger than life. Yet he found it impossible to have his talent recognized in intrigue-ridden imperial Vienna. The Maltz Jupiter Theatre takes on the flamboyant genius in the first show of its 10th anniversary season: the thrilling tour-de-force biodrama Amadeus.

Set in 18th-century Vienna, Amadeus portrays the young composer as seen through the eyes of his jealous rival, composer Antonio Salieri. Winner of the Tony Award for Best Play, the 1979 play by Peter Shaffer is often recognized in mainstream culture for the wildly popular, Academy Award–winning 1984 film version by the same name.

Featuring rich period costumes, the play highlights the music of Mozart, Salieri and other composers of the period. The premieres of Mozart’s operas The Abduction from the Seraglio, The Marriage of Figaro, Don Giovanni and The Magic Flute are each the setting for key scenes of the play, in which the now-elderly Salieri recounts his dealings with the brilliant composer. As court composer to Austrian Emperor Joseph II, Salieri recounts the awe and envy he felt when the emperor commissioned Mozart to write an opera in German, rather than the customary Italian.

The theater’s production will feature direction from accomplished opera and theater director Michael Gieleta. Scenic designer Philip Witcomb, a British designer based in New York, is designing the play’s set, evoking a dilapidated theater in which Salieri’s life is being recollected, with projection design by Andrzej Goulding. Costume designer Fabio Toblini — whose work was recently featured in American Theatre magazine — is recreating the refined style of 18th-century aristocratic European attire.

“We are excited to have assembled such an amazing team of designers for Amadeus, the first show of the theater’s 10th anniversary season,” said Andrew Kato, the theater’s producing artistic director. “We are particularly honored to offer our audiences the brilliant directorial work of Michael Gieleta, whose experience directing multilingual opera and stage productions will bring our production of Amadeus to new heights.”

The play will star Broadway veteran Tom Bloom as Salieri, who has been seen recently off-Broadway in The Big Meal at Playwrights’ Horizon, Timon of Athens at NYSF and Widow’s Blind Date at Circle-in-the-Square. He has performed at numerous regional theaters and has appeared frequently in film and TV, including The Thomas Crown Affair, The Emperor’s Club and Law & Order.

New York actor Ryan Garbayo, who will portray Amadeus, has been seen recently in Suddenly Last Summer at Westport Country Playhouse, The Time of Your Life at Attic Theater, Much Ado About Nothing at the Shakespeare Theatre in Washington, Unrequited at the Public Theater Shakespeare Lab and more.

“The challenge in directing a costume drama such as Amadeus lies in reducing the distance between the world of the play and contemporaneity, and not allowing the externalities of mores, language and costume to obstruct the reflection of our own lives in the play,” Gieleta said. “It is ironic that one of the world’s greatest composers needed as much drive, resilience and networking skills to survive in the ever-competitive musical Vienna of the 1790s as one needs to succeed in today’s world.”

Evening and matinee performances available, but seating is limited for this popular biodrama; call the box office for availability. Tickets start at $46. Amadeus is sponsored by Priscilla Heublein.

Tickets are now on sale for the theater’s entire 10th anniversary season.

For more information about the theater’s upcoming shows and conservatory, visit www.jupitertheatre.org or call the box office at (561) 575-2223.