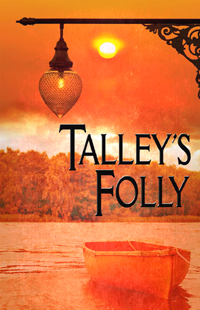 The production will play a strictly limited engagement through Nov. 11, with specially priced preview performances slated for Oct. 10 and 11.

For 12 years, West Palm Beach’s only professional, multi-award-winning resident theater has brought to the Palm Beaches a distinguished roster of plays under the guidance of Producing/Artistic Director William Hayes.

Talley’s Folly, the Pulitzer Prize–winning play by Lanford Wilson, follows two unlikely sweethearts, Matt Friedman and Sally Talley, as they once and for all settle their feelings for one another and grab their last chance at love. Set in 1944 in Lebanon, Mo., Talley’s Folly is part of the trilogy of Talley plays that also includes Fifth of July and Talley & Son.

Wilson was one of the most renowned American playwrights of the late 20th century. He had a penchant for characters who were downtrodden or on the fringes of society, and through them explored big and small themes of love and loss. A co-founder of Off-Broadway’s celebrated Circle Repertory Company, Wilson initially gained recognition in Off-Off-Broadway and quickly became a regular presence on Broadway. Among his other heralded, widely performed works are Balm in Gilead, The Hot l Baltimore and Burn This.

Palm Beach Dramaworks’ season will continue with A Delicate Balance by Edward Albee (Dec. 7 through Jan. 6), A Raisin in the Sun by Lorraine Hansberry (Feb. 1 through March 3), Exit the King by Eugene Ionesco (March 29 through April 28) and Dancing at Lughnasa by Brian Friel (May 24 through June 16).