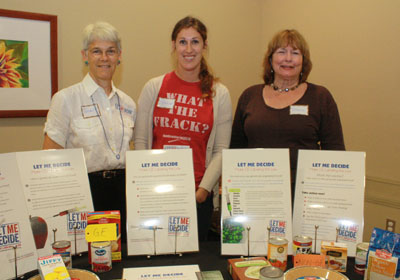 With the holiday season upon us, a group of activists is asking residents to take a closer look at what they are feeding their families. Members of Food & Water Watch hosted a “Genetically Engineered Thanksgiving Forum” on Sunday, Nov. 18 at the Wellington library.

The forum was an opportunity for residents to learn and ask questions about genetically engineered (GE) foods, which are prevalent in grocery stores across the nation. Food & Water Watch, along with other organizations, is pushing for mandatory labeling of all such foods, which are currently sold without mention of the process.

“Genetic engineering forces the DNA of one species into the DNA of another,” explained local coordinator Susan Lerner. “These combinations of genes from plants, animals, viruses and bacteria do not occur in nature or in any traditional pollination or selective processes that are used to change the characteristics of our plants.”

Food & Water Watch has launched its “Let Me Decide” campaign, aimed at pushing for GE labeling in Florida. Already, more than 1,000 Palm Beach County residents have signed on in support.

Nationally, California’s Proposition 37 to label GE foods earned 47 percent of the vote in the election this month but failed to pass. Worldwide, more than 50 countries require such labeling, and some have even banned GE foods altogether.

“In this country, consumers who don’t want to eat genetically engineered products, or don’t even know about them, don’t have a clear choice for their food,” Lerner said. “We can either choose to buy organic foods, or we don’t know what we’re getting at all.”

Lerner showed the crowd an 11-page booklet of products currently sold across the nation that contain GE foods. Because of the lack of labeling, she said, it’s impossible to know for sure.

“We don’t know if we’re getting tomatoes engineered with fish genes or if we’re giving our kids an ear of sweet corn that has been genetically manipulated to produce its own pesticide,” she said.

This is problematic, Lerner told the crowd, because of the lack of oversight when it comes to the crops. “There are no long-term studies that indicate that genetically altered food is safe for human consumption,” she said. “It is unacceptable and embarrassing that the U.S. is so far behind the rest of the world in its protection of its citizens against a potentially harmful food being introduced into the food chain.”

Lynna Kaucheck, Florida senior organizer for Food & Water Watch, explained that there is little regulation or testing done on these products.

“That is part of the problem,” she said, explaining that there are several agencies that regulate different aspects of crop farming. “Quite frankly, the regulations haven’t kept up with the technology.”

Lerner agreed, adding that GE foods often get a pass by these organizations because of old standards being applied.

Kaucheck encouraged residents to do more than just vote with their wallets. “It’s not enough to not buy the products,” she said. “We have to talk to people at the local, state and federal level.”

Food & Water Watch is hoping to get a bill introduced in the state legislature to address the issue. Members of the panel encouraged residents to write to their representatives addressing their concerns. “We have to open our mouths and let them know that we mean business,” Lerner said.

For more information, or to get involved, visit www.facebook.com/FWWFlorida.

ABOVE: Panelists Susan Lerner, Lynna Kaucheck and Diane Campion with a display of common genetically engineered foods and organic alternatives.