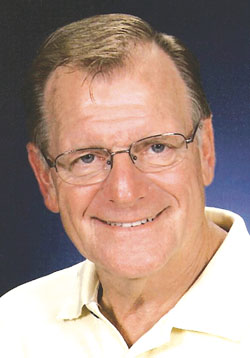 Royal Palm Beach Councilman Jeff Hmara is finishing up a governmental leadership program being conducted at the University of Miami.

On Saturday, Oct. 27, Hmara completed the fifth class in the series, where the topic was diversity, inclusion and equity.

“It was one of the best I had ever participated in,” Hmara said. “Having spent some time in the federal government, courses in diversity had always meant one of those buzzwords, if you will, but trying to make it real and impactful in a very positive way I had always thought was a challenge. One of the things I picked up was that the word ‘inclusion’ was probably one of the key thoughts in leveraging and making the best use of our differences.”

Hmara said the course has brought in some very knowledgeable, experienced individuals with expertise in their areas. “I’m looking forward to the last days of the session,” he said. “I think it was very worthwhile, and something I would highly recommend.”

Hmara was elected to the council last March and said the class is a refreshing interaction with other political leaders, since members of the Royal Palm Beach Village Council are constrained by law from communicating directly with each other outside council meetings.

The course is called the “Good Government Initiative, Cultivating Leaders of Excellence,” and it was developed by former Miami-Dade Commissioner Katy Sorenson to share experiences and include other people representing models of good government. “We have been exposed to many elected officials who have really had remarkable careers,” Hmara said.

One of the lecturers was former U.S. Sen. Bob Graham, who shared advice such as to never leave home without a notepad in your pocket. “I understand he’s notorious for taking notes, but basically the point of that was not only does he listen, but he takes action on things that he is told by constituents,” Hmara explained. “He’s a man of his word, and it’s demonstrated through follow-up on things that he does using this notepad.”

Other advice offered by Graham was to become an expert in a particular field so as to bring specialized expertise to government bodies.

Other speakers have included Lynn University Professor Robert Watson, a media commentator and author of more than 30 books on topics in American politics and history, who spoke on ethics from a presidential perspective.

Watson pointed out that President Harry Truman would deliberately bring onto his Cabinet people of differing opinions, even people from different parties, in order to invite and encourage debate so that he would be in a better position to make decisions. “I thought, wow, how courageous, how bold, what a great example,” Hmara said.

The course took place over four months, usually every other week on a Friday or Saturday. “There are two retreats that are two-day sessions,” he said. “We spend about a four-month period of time with the same group of peers.”

Hmara added that the fact that it’s spread over a long time lets participants go home and practice what they’ve learned.

Hmara was the only participant from Palm Beach County. He found out about the course at a League of Cities luncheon where Sorenson spoke. “I had just been elected, and I thought this sounds like the type of course for me to really come up to speed and climb up that learning curve quickly,” he said.

Participants brought their own experiences, which Hmara found valuable. “We each became a resource for one another,” he said.

The presenters were like mentors, while participants came to see their classmates as resources unto themselves. Hmara appreciated the opportunity to have conversations about issues. “It’s really powerful, and that’s one of the reasons I was really excited about the whole course,” he said.

Some of the classes were conducted off campus, including at the Chapman Homeless Assistance Center. “What was amazing to me was that this center was more than just a place for people to get a warm meal, get off the street and have a dry climate and bed to sleep in,” he said, explaining that the organization has successfully reintegrated homeless people, taking a homeless population of about 8,000 down to under 900 in a 10-year period.

“We had lunch there prepared by people who were formerly homeless who are being trained in culinary skills, and I’ve got to tell you it was some of the best food I’ve had recently,” he said. “These people at the Chapman Homeless Assistance Center are not only doing a good thing, but they’re doing it effectively. It’s also a private/public partnership, so it’s a great model. I’m going to see if there’s some application locally.”

Miami-Dade Mayor Carlos Gimenez spoke about working with the organization and the positive impact it had on a serious problem in Miami. “For me, it was the opportunity to see not only a well-intentioned but a well-run organization that really did make the kind of influence it intended to make, but had success that was measureable, which I think is really important,” Hmara said.

The last class, “Focusing on Inclusion and Diversity,” was intended to gain some understanding on how diverse cultures really are. “The focus of the class was on how to make diversity work better for you,” he said.

Hmara believes the course will help him become a better elected official. “I think you can become much more effective much more quickly, and that’s one of the primary reasons why I anticipated one of these courses would be tremendously helpful,” he said, adding that it exceeded his expectations.

A clincher for the course was when ex-Palm Beach County Commissioner Mary McCarty, who was convicted of accepting illegal gifts, spoke. “She presented her experience, and that was the first time she had appeared in public since she left prison,” he said. “That was remarkable and very powerful. You certainly could have heard a pin drop throughout her presentation.”

Applications for the 2013 class will be available online in January. “They want more Palm Beach County representation in these classes,” Hmara said.