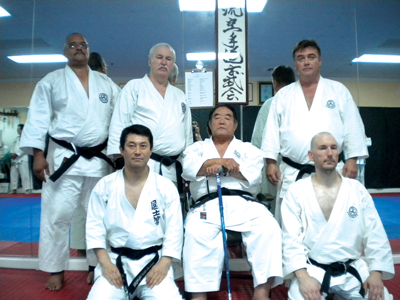 Demura is credited for being the first person to introduce Shito-Ryu Karate and Okinawan Kobudo (weapons) outside mainland Japan in 1965.

Demura settled in southern California, and since has grown his organization throughout the United States, Canada and South America, amassing a total of 32 countries. Demura is also noted for being Pat Morita’s student double in the original Karate Kid movies. Currently, HBO is producing a documentary on Demura’s life titled The Real Miyagi.

Also in attendance were students from Demura’s California location, instructors from different U.S. Genbu-Kai locations and a disciple of Demura from Japan, Ken Nishiki. Nishiki is a fourth dan black belt in shoto-kan karate and had a tremendous impact on everyone’s training. Students trained in basics techniques, forms, weapons, sword and self-defense applications. A great learning experience was had by all.

Genbu-Kai is a traditional Japanese martial arts school located at 13889 Wellington Trace, Suite A-21, in the Wellington Marketplace. For more information on classes, call (561) 804-1002 or visit the Genbu-Kai web site at www.floridagenbukai.com.