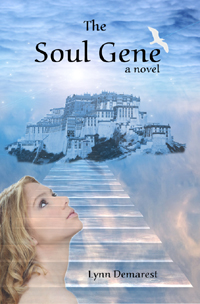 “I’m not a particularly religious person,” said Loxahatchee novelist Lynn Demarest, “but like most people, I can’t help but sense that I’m something more than a biological contraption.”

The feeling that human beings are something more than their physical selves hums at the heart of Demarest’s debut novel, The Soul Gene, a freewheeling science-fiction tale featuring a parade of characters at times sexy, violent, gruesome, funny, obscene, tender and provocative.

“Demarest has produced an accomplished first novel that calls to mind the witty science-fiction social satire of Kurt Vonnegut,” wrote former Sun-Sentinel book critic Chaucey Mabe. “Endlessly inventive, the book teems with a wide cast of convincing two-dimensional characters — from scientists and industrialists to contract hit-men to the Dalai Lama (I kid you not).”

Demarest’s anti-dystopian tale spans 100 years, from the sexual and scientific revolutions of the 1960s to the mid-21st century, when his imagined solar-powered world enjoys a new renaissance thanks largely to his lead character’s discovery, a scientific validation of religion stemming from an improbable series of events that leads one doomed character to suspect the hand of God is at play.

While Demarest has written a book of fiction, The Soul Gene is historically and scientifically accurate where it can be. President Lyndon Johnson’s overblown crowing about Arthur Kornberg’s synthesis of DNA in the 1960s actually happened. So did the 1993 discovery of a genetic marker for Huntington’s disease. Also true is the more recent discovery by a Korean scientist of a gene that when altered makes mice gay.

“My background as a newspaper reporter naturally led me to be as factual as I could,” Demarest said. “Also, I think being careful about the true parts of the story provides a framework upon which to hang the fictional bits. Gwendolyn and her fetus are tested for Huntington’s in 1993, for example, the first year such a test was available.”

One place Demarest’s imagination runs free is during a meeting between the novel’s main character, Bailey Foster, and the Dalai Lama, who is in town to speak. They rendezvous at the Biltmore Hotel in Coral Gables. (Foster is there to get a sample of the Dalai Lama’s DNA by swabbing the inside of his cheek.)

Despite the title, the novel is only incidentally about genetics. The technical details are brushed over in favor of the story.

“I’ve always been interested in genetics, which I’m sure will reap mind-blowing discoveries in the coming decades,” Demarest said. “But genetics in this novel is really just the vehicle for the story, which I consider to be mostly about truth and belief and the always available opportunity for change and redemption.”

The Soul Gene is available as an e-book and a trade paperback at www.amazon.com. For more information about the book and its author, visit www.soulgene.com.