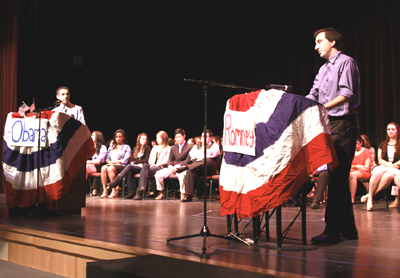 The Palm Beach Central High School Advanced Placement American Government students held a mock debate Tuesday, Oct. 30. A total of 150 students participated in the event, in which more than 30 campaign topics were debated. Senior Christian Cepeda served as the debate moderator. The activity was presented to social studies classes to inform students of the various election issues. A mock election was held on campus Monday, Nov. 5, and all students were encouraged to vote. The school thanks AP American Government teacher Tom Atkins for providing a valuable hands-on lesson for his students. Pictured above are Adnan Warryat as President Barack Obama and Ryan Dougherty as Gov. Mitt Romney during the mock debate.