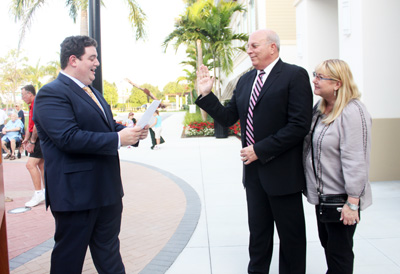 For Wellington, 2012 was a year of controversy, divisiveness and change that threatened to split the community at its seams. Wellington was thrust into the spotlight with a high-profile election and recount that changed the makeup of the Wellington Village Council.

The village was also subjected to an audit by the Palm Beach County Office of the Inspector General that called into question some purchasing methods. On a related note, the newly installed council backed Wellington out of the ongoing lawsuit against the inspector general.

Equestrian venues continued to be the hot-button issue, from the divisive Equestrian Village property to the council’s decision to revisit year-old approvals for the Palm Beach International Equestrian Center. Wellington was picked as one of the contenders for the 2018 World Equestrian Games but ultimately withdrew from the running.

In August, Tropical Storm Isaac flooded the area and brought to light drainage issues across the community.

Wellington’s municipal election marked a turning point for the village, with a new council majority ultimately chosen. But there was controversy from the start. For the first time in Wellington’s history, political action committee money helped fuel candidates, leading to attack ads and mailers.

On March 6, the results came in and named Mayor Bob Margolis, former Councilman Al Paglia and local activist Shauna Hostetler winners. But during an audit of the votes, a tabulation error was discovered. Florida law prevented a recount without a court order, leading to several weeks of meetings regarding the issue before a judge ordered a recount.

On March 31, the community watched as a six-hour recount took place. Nearly a month after the vote, it was official: Margolis defeated former Mayor Darell Bowen, Matt Willhite retained his seat and John Greene defeated Hostetler. The new council was seated April 10.

The most contentious issue of the year involved the yet-unresolved Equestrian Village plans. Originally proposed as a world-class dressage venue with a covered arena, hotel and retail space, the project divided the community. The former council gave initial approval for the plans, but the election caused new controversy.
In May, property owners eliminated most of the commercial plans for the site, hoping to come to an agreement with village officials. But later that month, approvals for the project were taken back after a missed deadline led council members to revoke previous OKs.

Then, in July, a divided council revoked the site’s final approval, which would have allowed a year-round, commercial dressage facility. The move prompted equestrians to petition the council to approve a 2013 dressage season. At the council’s Aug. 17 meeting, members agreed to allow for dressage competition if property owners agreed to certain conditions.

But debate over the property continued for the rest of the year. With several lawsuits in court, the Wellington Village Council hoped to reach a settlement agreement; however, a settlement had not yet been reached going into the New Year.

Wellington also made history this year when it conducted a special hearing July 17 to look into the year-old approval of a master plan amendment for the Palm Beach International Equestrian Center, seeking to uncover any wrongdoing. The amendment made several changes to site plans, including the controversial realignment of Equestrian Club Drive and platting of other roads, and dubbed it a commercial equestrian arena.

At the core of the issue was whether the applicants had deliberately left out a crucial part of the site’s history in the application — a 2001 suspension of development on the site. Also in contention was whether the suspension had been automatically lifted by approval of previous master plan amendments.

Ultimately, council members agreed that the omitted information should have been included but did not find that it deliberately was left out. Council members decided not to have a full rehearing of the approvals.

In June, Wellington was named one of five host candidates for the prestigious 2018 World Equestrian Games, the world championships of international equestrian disciplines. However, in July, after council members revoked approvals for Equestrian Village and began reexamining the PBIEC master plan, show promoters withdrew their bid from consideration for the games. Citing council members’ decisions, promoters said that Wellington, by balking, was endangering local equestrian venues. For their part, council members said they were puzzled by the withdrawal because they’d only been seeking more information before giving their support.

Council members made another controversial move when they decided in a 3-2 vote to fire longtime Village Attorney Jeff Kurtz in November. Despite several pending lawsuits, council members opted to end their contract with Kurtz and instead look into options for an in-house attorney.

Council members paved the road to that decision when they voted to have a consulting firm evaluate the benefits of contracted vs. an in-house attorney. But rather than wait for advice from the firm, Margolis, Willhite and Greene opted to fire Kurtz.

In December, council members decided to stick with Kurtz’s firm, with attorney Glen Torcivia at the helm, while they search for new legal representation.

Tropical Storm Isaac dropped an unprecedented 17 inches of rain on the western communities in late August, and Wellington was among the communities with flooding woes. The waters caused more than $1 million worth of damage to village property alone. Roads were flooded for days afterward.

Areas to the south — those in the Equestrian Preserve Area — were hit hardest, especially Palm Beach Point. Wellington pumped water around the clock and even got approval to drain into the Arthur R. Marshall Loxahatchee National Wildlife Refuge. As the floodwaters subsided, Wellington officials hoped to learn from the experience and bring into focus the importance of proper drainage and stormwater maintenance.

In April, the inspector general’s office released an audit of Wellington employees’ use of debit cards and found that some of the spending was not in taxpayers’ best interest. The audit looked at 763 charges on Wellington purchasing cards (called p-cards) during the first 10 months of 2011.

About $28,000 of $175,000 was called into question, with meals purchased for staff training, birthday lunches for staff and retirement or holiday parties being chief among the concerns. Other concerns included the village purchasing coffee and snacks for staff and sending gifts of bereavement.

The first act of Wellington’s newly elected council in April was voting unanimously to withdraw from the lawsuit challenging the financing of the inspector general’s office. Citing both the cost of litigation and community outcry against the decision to sue in the first place, council members decided to drop out of the suit.

On May 5, after a community rebuild, Wellington reopened Tiger Shark Cove Park. Wellington sought help in the design from elementary school children and once again asked parents and residents to come out and build the park.

And construction began on the much-anticipated new location of the Wellington Boys & Girls Club in May when club officials broke ground on the facility, located on Wellington Trace.

After older residents had been asking for years for a voice in village matters, council members approved a new Senior Advisory Committee. The committee met for the first time in December and will represent seniors in village business.

ABOVE: Newly elected Mayor Bob Margolis is sworn in April 10 by his son Josh while his wife Linda looks on.