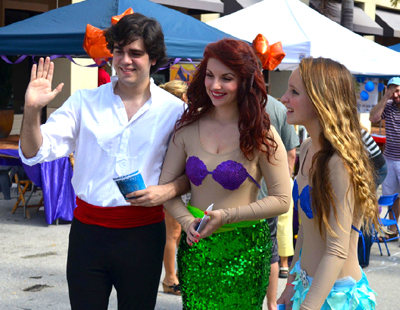 KWP Productions will present the first regional theater production of Disney’s The Little Mermaid Jr., starting Dec. 28 and running through Jan. 6 at the Borland Center for Performing Arts in Palm Beach Gardens. The 60-minute musical, designed for youth performers, is based on the 2008 Broadway production and the 1989 animated feature film. The cast contains approximately 33 local students from elementary to college, led by Director Kimberly Rommel-Enright and Helen Buttery, musical director and choreographer.

This classic Disney title contains all of the songs from the Academy Award–winning animated feature film as well as three new songs from the Broadway show. The Little Mermaid Jr. takes place in a magical kingdom beneath the sea, where a beautiful young mermaid named Ariel longs to leave her ocean home to live in the world above. But first, she’ll have to defy her father, the king of the sea, escape the clutches of an evil sea witch and convince a prince that she’s the girl with the perfect voice.

Located in northern Palm Beach County, KWP Productions is dedicated to inspiring the next generation of performers and theatre goers. The company enjoys working with young people to create shows for young and old alike. Through its productions, KWP strives to teach its actors about the craft of acting as well as the process it takes to create a full-scale production. KWP Productions holds open auditions to the public. Audition requirements vary by show. There is never a fee or charge for participating in a KWP Production show. For more information, call (561) 339-4687 or e-mail info@kwpproductions.com.

Disney Theatrical Group operates under the direction of Thomas Schumacher and is among the world’s most successful commercial theater enterprises. Through Disney Theatrical Productions, Disney on Ice and Disney Live!, DTG brings live entertainment events to a global annual audience of more than 19 million people in more than 50 countries.

Under the Disney Theatrical Productions banner, the group produces and licenses Broadway musicals around the world, including Beauty and the Beast, The Lion King, Elton John and Tim Rice’s Aida, Tarzan, Mary Poppins (a co-production by Disney and Cameron Mackintosh) and The Little Mermaid. Other successful stage musical ventures have included King David in concert, the national tour of On The Record, several touring versions of Disney’s high school musical Der Glöckner Von Notre Dame in Berlin, a critically hailed Off-Broadway production of Peter and the Starcatcher at the New York Theatre Workshop and, most recently, premiere stage adaptations of the films Aladdin at 5th Avenue Theatre and Newsies at Paper Mill Playhouse.

Tickets for Disney’s The Little Mermaid Jr. cost $20 for adults and $15 for students. To purchase tickets, visit www.showtix4u.com, call (561) 339-4687 or visit the box office 30 minutes prior to show time. The Borland Center is located at 4901 PGA Blvd., Palm Beach Gardens.