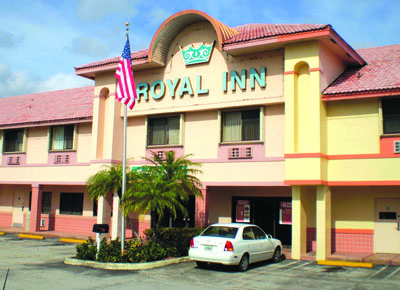 The Royal Palm Beach Planning & Zoning Commission recommended approval Monday for improvements to the Royal Inn, including new paint colors along with parking and landscape modifications.

The commission supported a proposal to repaint the hotel at the northwest corner of Royal Palm Beach and Southern boulevards from its current light pink base color with mocha trim to a golden yellow color known as “filtered sunlight” as the base with a pinkish orange color called “coral glow” as the trim.

Erwin pointed out that when the building was painted originally, no architectural approval was required.

John Bellamy of Island Designs Architects said the goal is to upgrade, enhance and improve the overall appearance of the Royal Inn by repainting with two carefully selected colors designed to brighten the overall look. The golden yellow hue is for the walls, covered walkways, stairs, storefronts, soffits and ceilings. “The coral glow is the accent color,” he said. “That’s for the fascia, trim, raised stucco, accent bands and the doors.”

Bellamy said portions of the building were actually painted to assure that the colors meet or exceed expectations.

Commissioners Richard Becher and Michael Axelberd also liked the colors. “I looked at the colors, and I thought it looked great,” Axelberd said.

Commissioner Darrel Lange asked whether the teal awning signs would be redone, and Erwin said that would be under a separate application.

Becher made a motion to approve the color scheme, which carried 5-0.

The commissioners also recommended approval of a proposed landscape plan for a truck parking lot to be located on the west side of the hotel. The applicant sought a waiver to the 25-foot landscape requirement to allow a 9-foot buffer along Southern Blvd., which had been reduced during the Southern Blvd. widening, and to allow the omission of a 3-foot berm on the north and south landscape buffers.

The hotel also sought a waiver to allow a one-to-one ratio for royal palms rather than three-to-one, which was consistent with the rest of the property, and a site plan modification to include seven truck parking spaces.

Erwin explained that the area on the west side of the Royal Inn property is the former site of an Amoco gas station that was no longer workable as a service station after land was taken for the widening of Southern Blvd. The site is dirt and grass with some trees on the north side of the property, he said.

Axelberd asked whether trucks were parking there now, and Erwin said they have been, but it drew a code violation. “The applicant is bringing in this application to close out that violation,” he said.

Axelberd also asked whether the elimination of the berm would cause noise problems with neighboring properties, and Erwin said that is not expected. He explained that there would be only seven trucks there at any one time, and they would be hotel guests.

“They park there now at various locations on site,” Erwin said. “With the proximity to Southern Blvd., there is high background noise there, so I’m not sure what kind of effect it would have. Generally when they park in there, they are staying overnight, so it’s not like they’re coming and going all day long.”

Hotel owner Jess Santamaria said he expects the truck parking to be temporary. “My intent is within the next 12 to 24 months to build additional hotel rooms,” he said, explaining that he currently complies with the village’s parking requirements. “These are workers who work construction jobs in the immediate area, mostly at the FPL power plant down the road. Once they finish their jobs, I may not have any trucks.”

Santamaria added that he could have the trucks park alongside other guests but that he would prefer to keep them separate.

Becher made a motion to approve the application, which carried 5-0.
ABOVE: The Royal Inn with part of the exterior painted in its new color scheme (far right).