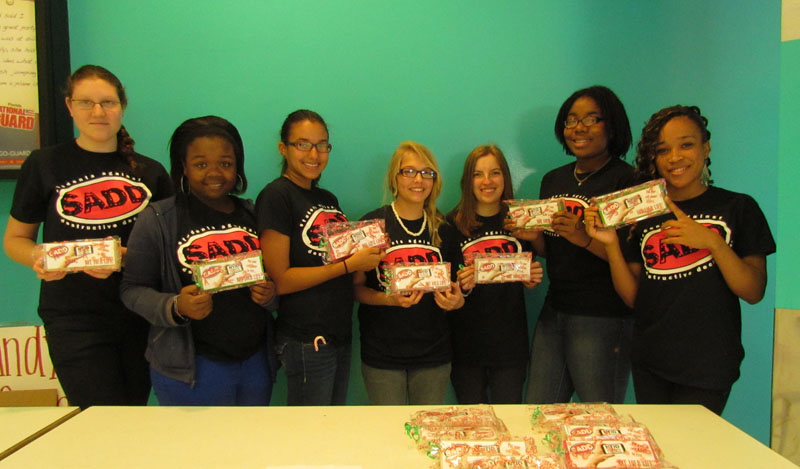 More than 50 students trickle into the classroom of Royal Palm Beach High School teacher Maureen Witkowski. This is where they spent weeks planning and thinking of ways to reduce the number of students texting while driving.

The students are part of the high school’s Students Against Destructive Decisions or SADD program, which Witkowski coordinates. The program gives students the opportunity to stop their peers from making bad choices through support and awareness.

The desire to fight texting while driving began at the beginning of the school year, during one of the group’s meetings. “We needed a way to get teenagers to put their cell phones away while driving,” Witkowski said. “But cell phones for these kids are like a bad habit — you can’t just stop the habit, you have to replace it with something else.”

Instead of advising students to put their phones in the back seat, the SADD members came up with the concept of a slide box to put the phones in while driving.

“For many of these kids, the cell phone is like their baby; it’s their way to be connected to everything that is going on,” Witkowski said. “They would never go for just throwing it in the back seat, trunk or glove. With a box, they could carefully put their cell phones away.”

One of the concerns students have about putting their phones away is the accessibility in case of an emergency.

“With the slide box, they just have to slide it out of the box, and their cell phone is right there,” Witkowski said.

And if a student is expecting an important call or text, and they hear it buzzing or ringing inside the box, they can still access it. “All they have to do is pull over to the side of the road and slide it out of the box,” Witkowski said. “This way, they have to think twice before just looking at their phones while driving.”

Witkowski and the SADD members spent the past few months designing the box and getting it made, and on Friday, Dec. 14, they distributed more than 700 boxes as a free gift to students, faculty and staff during the lunch periods in the main courtyard and cafeteria.

To get the word out about not texting while driving, the SADD members also came up with a campaign and slogan, ‘No texting, I’m driving’ or NTID. One of the highlights of the campaign was a rap song and video, which advised students not to text while driving. “Music holds teenagers’ attention, so I asked the students if they knew anybody in the school who raps,” Witkowski said. “They all said, at the same time, ‘Mr. Johnson, Mr. Johnson.’”

Witkowski asked science and ESE teacher Terrance Johnson if he would be interested in doing a rap song about the campaign to deter students from texting while driving. “We sat down and came up with all the ideas,” she said. “And he put all the ingredients together, wrote a rap song, and SADD gave him the money to go to a recording studio. Then we created the music video for it.”

Johnson was also featured in the video as an example of a parent using the slide box before driving.

“Many of our students say that their parents are the biggest culprits when it comes to texting while driving,” Witkowski said. “So we decided to have Mr. Johnson in the video as a parent himself, being a role model for students.”

Royal Palm Beach High School SADD members hope that their efforts will reduce the number of accidents due to texting while driving, not only at their school but also for people all over America. “Our plan is to take this campaign nationally and get schools all over the country involved,” Witkowski said.