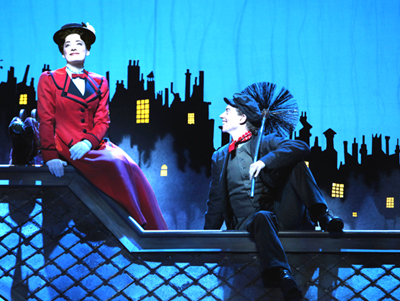 The Kravis Center for the Performing Arts, along with producers Thomas Schumacher of Disney Theatrical Productions and Cameron Mackintosh, have announced that tickets for the Kravis Center premiere of the long-awaited production of Mary Poppins will go on sale to the public Saturday, Dec. 8 at 10 a.m.

West Palm Beach’s eagerly awaited stage production will begin performances at the Kravis Center on Tuesday, Jan. 29 at 8 p.m. for a limited engagement of one week through Sunday, Feb. 3.

With six productions currently running on three continents, Mary Poppins is one of the biggest stage musical successes to emerge from London or New York in recent years. Worldwide to date, the show has grossed over $731 million and welcomed 10 million guests.

The musical is the winner of 44 major theater awards around the globe, including Tony, Olivier, Helpmann and Evening Standard awards.

The entire original creative team has reunited to bring this magical story of the world’s most famous nanny to audiences around North America. The Mary Poppins North American Tour began performances in 2009 and has played to two and a half million delighted theatergoers in 60 cities to date.

Mary Poppins is a co-production of Disney and Cameron Mackintosh. Based on P.L. Travers’ cherished stories and the classic 1964 Walt Disney film, Mary Poppins the stage play features the Academy Award–winning music and lyrics of Richard M. Sherman and Robert B. Sherman. The stage production has been created, in collaboration with Cameron Mackintosh, by Academy Award–winning screenwriter Julian Fellowes, who has written the book, and the Olivier Award–winning team of George Stiles and Anthony Drewe, who have composed new songs and additional music and lyrics.

Mary Poppins received its worldwide premiere at the Prince Edward Theatre in the West End in December 2004. Following its successful three-year London run, the production launched an acclaimed U.K. tour.

The Broadway production of Mary Poppins officially opened at the New Amsterdam Theatre on Nov. 16, 2006, recouping its initial Broadway investment within 52 weeks of its premiere. Mary Poppins is the only show from the 2006-07 theatrical season still in performance.

Mary Poppins can also be seen Sydney, Australia (at the Capitol Theatre) and Mexico City, Mexico. Productions of Mary Poppins have also been mounted in Finland, Denmark and the Czech Republic.

The West Palm Beach engagement of Mary Poppins is presented by arrangement with the Kravis Center for the Performing Arts and is a subscription offering of the Kravis On Broadway Series.

For more information about the production, visit the Mary Poppins web site at www.marypoppins.com.

ABOVE: A scene from Mary Poppins, opening Jan. 29 at the Kravis Center.