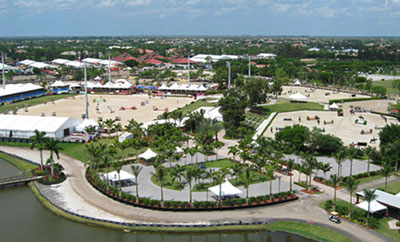 Board members voted 4-2 on Wednesday, Dec. 5 to approve variances for six rings on the property, a move that Wellington staff said was necessary after the site won approval last year to operate as a commercial equestrian arena.

Sexton noted that show managers were not asking for any changes to the property, simply to get a variance for the rings that are already built.

But Coleman and Radosevich, both equestrian activists, were concerned about two rings located along Equestrian Club Drive.

Village Attorney Jeff Kurtz said that the board should consider the variance without regard to any litigation.

“There is no order from the court saying that the road can’t be used or that any of this is affected on an ongoing basis,” he said. “There is the possibility that the road would have to be relocated. If that were to occur, these [two] rings would be entirely changed. I think we have to deal with the situation at hand.”

Radosevich was also concerned about the proximity of the two rings to the road. “I’ve seen ponies jump out of rings,” she said. “The public welfare aspect of this concerns me. There’s no regulation about how far they have to be set back from a road.”

But Equestrian Sport Productions President Michael Stone said that the rings have a three-board fence as well as a tall hedge to shield the rings from the road. “Ponies can’t jump out of that ring,” he said. “It has never happened.”

Coleman said that she did not feel that the two rings in question met the variance requirements because they could have been built according to the standards.

“They have only been there for two years,” she said. “I believe they have become a special privilege.”

Coleman was also concerned that although the variances are for the rings, those two rings in particular are often used for parking.

“A significant amount of time those are used for parking,” she said. “Are we granting a variance for riding rings or for parking lots?”

But Kurtz said that a parking lot would not require the 100-foot setback.

Board Member Paul Adams said he trusted staff’s recommendation and suggested that the board approve the variances. Furthermore, Adams said he didn’t want to get in the middle of litigation on the issue.

“I’d rather let the courts work that out,” he said. “The rings will stay or they will go, because all of the discussion is about those two rings.”

Board Member Mike Drahos pointed out that the Equestrian Preserve Committee heard the issue last month and recommended approval 4-1.

“Though I appreciate that we have equestrians here on the board, I have always followed the recommendations of the Equestrian Preserve Committee — specifically when it includes the best interests of the equestrian community,” he said. “I have to think that committee considered safety issues.”

Drahos made a motion to approve the variance request, which passed 4-2 with Coleman and Radosevich opposed.