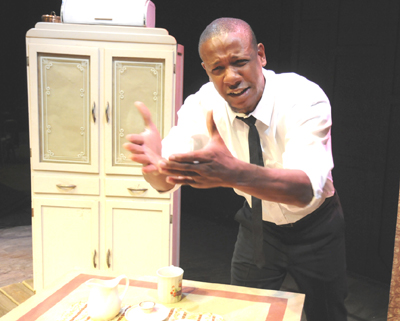 Considered by many to be one of the greatest plays of the 20th century, Lorraine Hansberry’s powerful drama A Raisin in the Sun will open Friday, Feb. 1 at 8 p.m. at Palm Beach Dramaworks’ Don & Ann Brown Theatre (201 Clematis Street, West Palm Beach).

The production will play a strictly limited engagement through March 3, with specially priced preview performances on Wednesday and Thursday, Jan. 30 and 31.

For 12 years, West Palm Beach’s only professional, multi-award-winning resident theater has brought to the Palm Beaches a distinguished roster of plays under the guidance of Producing Artistic Director William Hayes.

Set in the 1950s on the South Side of Chicago, A Raisin In The Sun is the story of the Younger family and their receipt of a substantial insurance payment that leads to life-changing decisions. The play is inspired in part by the experience of playwright Lorraine Hansberry’s family, when her parents purchased a house in a white neighborhood. As the Youngers argue over how best to use the money, the drama addresses issues that were rarely discussed at that time, including women’s rights and black identity. The play’s title comes from the poem “Harlem,” also known as “A Dream Deferred,” by Langston Hughes.

Hansberry was a playwright, author and activist. The granddaughter of a freed slave, she grew up in a middle-class activist family in Chicago. After moving to New York, Hansberry worked for a time at Paul Robeson’s progressive black newspaper, Freedom, first as a writer and then as an associate editor. Hansberry completed A Raisin in the Sun in 1957, but it took producer Philip Rose well over a year to raise the money to bring the play to Broadway. The original production, directed by Lloyd Richards, opened on March 11, 1959.

Dramaworks’ season will continue with Exit the King by Eugene Ionesco (March 29 through April 28) and Dancing at Lughnasa by Brian Friel (May 24 through June 16).

ABOVE: Ethan Henry in a scene from A Raisin in the Sun. Photo by Alicia Donelan