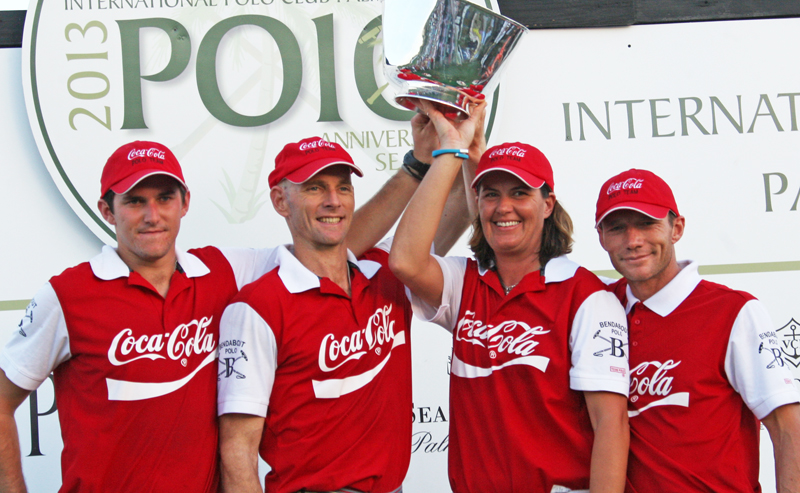 Coca-Cola’s Julio Arellano broke free of the pack to receive a pinpoint pass from teammate Sugar Erskine as he scored the winning goal in the first 18 seconds of sudden-death overtime in the finals of the 20-goal Herbie Pennell Cup.

Boasting the largest opening day crowd in the club’s 10-year history, offering a display of several dozen Supercars and hosting actress Bo Derek, the International Polo Club pulled out all the stops in the club’s Sunday season opener.

“We have been very excited about the way everything came together for us,” IPC President of Club Operations John Wash said. “We had beautiful weather, a wonderful turnout and an exciting game that went into overtime. We really couldn’t ask for much more.”

Neither team gained much ground in the second period. They each managed a couple of goals and Coca-Cola continued to hold the lead, 5-4. Arellano and Gillian Johnston scored single goals for Coca-Cola in the third. Pieres scored twice for Villa Del Lago, and the first half ended with Coca-Cola ahead, 7-6.

Villa Del Lago struggled to get back into the game, but Coca-Cola managed to keep them at bay. Coca-Cola led 10-8 after the fourth chukker and 11-9 after the fifth.

Villa Del Lago’s Magoo Laprida and Coca-Cola’s Johnston traded goals early in the sixth chukker, but Coca-Cola was still in the lead, 12-10. Laprida cut the lead to a single goal, 12-11, on a second penalty shot. Halfway through the chukker, Augustin Obregon tied it up at 12-12 as the game seemed to be slipping away from Coca-Cola. A final breakaway toward the Villa Del Lago goal had Johnston just missing the winning goal and sending the game into sudden-death overtime.

The ball was thrown in, and both teams struggled for control. Erskine managed to break free and send the ball out of the pack to a streaking Arellano, and seconds later he drove the ball through the goal posts for the exciting overtime win.

Coca-Cola will return to defend their 2012 Joe Barry Memorial Cup title against La Herradura on Sunday, Jan. 13 at 3 p.m.

The high-goal polo action takes place every Sunday through April 21 at the International Polo Club. Ticket prices for Sunday polo range from $10 general admission to $120 box seating. Tickets for Sunday brunch at the Pavilion and its reception start at $55, upward to $330 for the Veuve Clicquot brunch package for two. Tickets can be purchased online at www.internationalpoloclub.com, or by calling (561) 204-5687. Find IPC on Facebook, follow on Twitter at @SundayPolo or visit www.ipcscoreboard.com for scores, schedules, rosters and other polo info.