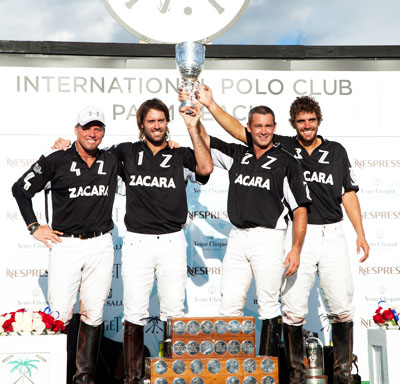 Promising 16 weeks of fierce competition and world-class amenities, the International Polo Club Palm Beach invites the community as it kicks off its 10th anniversary season on Sunday, Jan. 6 with the Herbie Pennell Cup.

“We are pleased to celebrate our 10th season of producing week after week of championship Sunday polo events that have attractions for entire families,” IPC President of Club Operations John Wash told the Town-Crier Wednesday.

Wash said that IPC has helped elevate Wellington to world-renowned status, drawing thousands of spectators, players and polo enthusiasts to the community each winter.

“Our 10th anniversary is an important milestone because it represents 10 years of consistency in the production of the highest level of polo competition in North America and ongoing events that support both the Wellington community and the club itself,” Wash said.

Fans will have a chance to watch as the world’s 10-goal players compete on the IPC fields. The eight players who have achieved polo’s highest handicap will be competing in some of polo’s most prestigious tournaments slated for the 2013 season at IPC.

“It has taken a great deal of dedication and hard work to get to where we are today,” Wash said. “We continue to attract not only the top players and teams from around the globe, but we have managed to attract and keep the top polo tournaments in North America with the C.V. Whitney Cup, the USPA Piaget Gold Cup and the prestigious USPA Maserati 109th U.S. Open Championship.”

Wash said there is much to look forward to this year. “A highlight of every season at IPC is the Outback 40-Goal Challenge in which the eight highest-rated polo players in the world compete in an exhibition charity match,” he said.

To celebrate the club’s 10th anniversary milestone, actress Bo Derek — who rose to fame in the 1979 blockbuster 10 — will throw out the season’s first ball this Sunday.

“We’re thrilled to have Bo on hand to help us celebrate the start of our 10th anniversary season,” Wash said. “Being someone who loves horses and appreciates polo at a world-class level, she’s a perfect choice.”

This year, fans will have more opportunity than ever to see not only the top-ranked polo players in the world but also the celebrities who frequent the matches.

“In the past, the celebrities we had on hand for the coin-toss ceremony at the start of the game have been unavailable to the general public,” Wash said. “However, we have taken steps to ensure they will be more accessible to our friends and fans this year.”

And car enthusiasts will get a chance to have a look at dozens of high-performance Maseratis, Ferraris and Lamborghinis for the preview of SuperCar week during the 20-goal Herbie Pennell Cup match.

The event is one of the many ways in which IPC has expanded Sunday polo and use of the club beyond just the world-class matches.

“This 10th season, the club is offering more than just polo,” Wash said. “We feel that as the club has developed and matured, it has become a Sunday afternoon destination for anyone looking for excitement and social interaction, along with some of the best polo in the world.”

It’s truly a family affair, with a “fun zone” just for kids, live music and contests for all and, of course, divot stomping. “Our fun zone continues to be available to entertain the younger attendants,” Wash said, “while tailgate and hat contests seem to energize even the most sophisticated polo followers. Jazz bands and celebratory trophy presentations continue to highlight the Sunday activities as we cheer on our favorite players and teams.”

Ticket prices for Sunday range from $10 general admission to $120 box seating. Sunday brunch at the Pavilion and Pavilion reception packages range from $55 to $330 for the Veuve Clicquot brunch package for two.