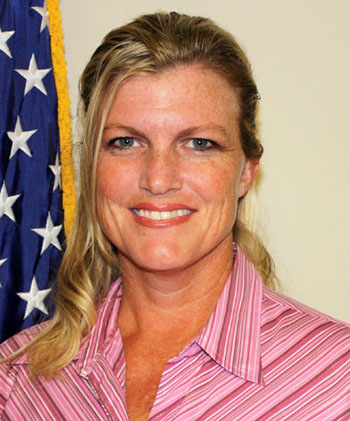 Newly appointed Indian Trail Improvement District President Jennifer Hager told the Town-Crier this week that her primary goal is to make sure that residents are allowed input into district issues and that the board continues to work together.

The ITID Board of Supervisors was shaken up in the November election when former Supervisor Carlos Enriquez lost to newcomer Gary Dunkley, who voted with Hager and Vice President Carol Jacobs to make Hager the district’s new president.

Hager replaced longtime ITID Supervisor Michelle Damone in that role. Damone remains on the board, but without a title.

“There is a change to the board, specifically with myself being president, and I would like the public to know that they can come to these meetings and be heard, and that’s important to me,” Hager said. “I want to hear what they have to say. I am their voice, and I feel strongly about my obligations to these people.”

Hager said she relates to residents attending meetings because she was once in their position.

“I know at these meetings it’s difficult to get up and speak, and it’s more difficult when you’re up there speaking,” she said. “People get nervous, but I’m not very intimidating. I think that we’re a community and we can work together, and part of it is to hear what residents have to say and let them know that they’re welcome at the meeting.”

Hager said residents have talked about the discord on the board and with staff. “I have voiced this in the past, and I believe it to be true,” she said. “The only way that we’re really going to be able to work through these problems is to not stay in the past — this might sound cliché — but to learn from the past, and to move forward with what we have built, and keep going.”

Being a schoolteacher, Hager considers herself experienced at dealing with diverse personalities. “There are personalities everywhere,” she said. “I have to deal with a myriad of personalities, in school, with parents, other teachers, students, the public; I’m out there talking to residents a lot. On this board there are a lot of personality issues. I just think we need to be adults and handle it.”

Hager said she wants to take a realistic outlook at the district and its responsibilities. “As far as I’m concerned, Indian Trail is first and foremost a water control district,” she said. “We’re not the president’s office; we’re not the county commissioners. We need to be able to manage what we are before we can hope to do anything more.”

Under her leadership, Hager wants ITID to focus on water first, including the proper care and maintenance of swales, canals and retention areas.

“I agree that Indian Trail needs to pursue every avenue to get more outfall,” she said. “The board is continuing to ask for more discharge from the South Florida Water Management District. We need more than the allotted quarter of an inch. However, we need to pay careful attention to how we maintain the outfall that we currently have. It’s not a matter of only having a quarter of an inch allowance, it’s more of a matter of how we deal with and manage that quarter of an inch we’re allotted.”

As a part of the process, Hager said ITID will continue to work to find ways to hold water. “We need the capacity to maintain more of our own water,” she said. “The ability to hold on to more of our own water in an emergency would decrease the likelihood of severe flash flooding, which was the problem with [Tropical Storm] Isaac.”

As an example, she said that if swales and canals were designed so they could hold more water, it would not only increase storage capacity, but also lead to fewer issues with moving large amounts of water when necessary.

Also, pumps and other equipment need to be maintained so that they are dependable. “We have problems with things not working when they’re supposed to,” Hager said. “That, to me, is compromising what people work for. I get up and go to work so I can have my property with my horses on it. And I’m sure a lot of people are like that. I mean, if I don’t have my property, what do I have? Not much.”

Roads are another district responsibility, and Hager said she has not been happy with their condition since she moved here.

“That’s one of the main reasons I got involved,” she said. “We really need to rethink the roads. I don’t know if it’s going to come down to graders or people operating the graders, but the roads are a mess. I would like for people’s cars not to get destroyed going down washboard roads, but then again there has to be some happy medium. I moved out here because I love the idea of living on dirt roads, but with a dirt road comes a price.”

Many people speed down roads to decrease the washboard effect on their vehicle, she said, but they need to be made aware that speeding is also what creates the washboard effect. “We only have six graders and 110 square miles to deal with,” she said.

Horse trails need to be improved so they are safer, Hager added. “I don’t want people to think that’s my only concern, because it isn’t, but there’s nowhere safe to ride out here in The Acreage,” she said, pointing out that one of the problems is that the existing trails are not interconnected. “A rider is forced to enter into traffic, cross traffic or move with traffic… If they want to ride without the threat of traffic, they have to trailer to a riding area. To be able to ride around the neighborhood has become increasingly dangerous.”

She also wants to improve safety for pedestrians by seeing that all roads have at least one sidewalk or guardrail. “I’m looking for something that will make the most people happy,” Hager said.

But in order to achieve these things, the board has to work together. “We need to remember that our jobs are to serve the public, and I’m not there to serve myself,” Hager said. “If we can remember that one aspect in this game, so many other issues and concerns will iron themselves out.”