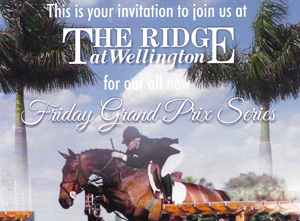 Members of the Wellington Village Council unanimously granted an equestrian special-use permit Tuesday to The Ridge at Wellington for several horse shows this season despite a protest from Equestrian Sport Productions.

The Ridge at Wellington is a show facility in the Palm Beach Point community that hosts a weekly show geared toward lower-level competition.

The item was pulled from the consent agenda because of a last-minute protest from attorney Dan Rosenbaum, representing Equestrian Sport Productions, the company that produces the Winter Equestrian Festival.

Rosenbaum suggested that village staff did not evaluate the permit application based on the required standards.

“We received this objection today,” Village Manager Paul Schofield said. “Absent an objection, these permit applications would be on the consent agenda.”

Long Range Planning Director Tim Stillings explained that originally, staff did not believe the shows would require an equestrian special-use permit but later felt it would apply.

“The shows are more than four days,” he said. “The brochure suggested that although they are not selling tickets, they aren’t turning people away who want to go watch.”

Stillings said the shows are low-impact on the community and noted that the site is zoned for commercial equestrian use. “If you didn’t know there was a show there and drove by the site, you wouldn’t know a show was there,” he said.

Stillings said that the site met all 10 standards required to issue a permit. “I disagree that we failed to evaluate the application based on the standards sufficiently,” he said.

Vice Mayor Howard Coates said the show seems to be a low-intensity use. “The intensity of this seems to be very light,” he said. “There’s not a great number of spectators there.”

Coates said he thought one recommendation on the application — to have security personnel on site — was unnecessary and cost-prohibitive. “It doesn’t look like there will be much done with it to begin with in terms of spectators and crowd control,” he said. “Aren’t we overreacting?”

“They said they recommend hiring someone,” he said. “It wasn’t a requirement. We could put a condition that if they expect to receive more than 100 visitors they do so, but it was a recommendation on their part.”

During public comment, several residents spoke in support of the show.

Gene Fruehling said that he lives about three farms away from the site. “I don’t even know when they have shows,” he said. “The activity they have isn’t any different than a busy day at our farm with riders and trainers.”

Mason Phelps characterized the shows as first-class but low-impact.

“They do not sell tables,” he said. “They don’t advertise to spectators. I fully support what they are doing, and I applaud them for providing… a place to develop younger horses and younger riders so they can one day compete at the Winter Equestrian Festival.”

Coates made a motion to approve the permit subject to removing the recommendation to hire security, which passed unanimously.