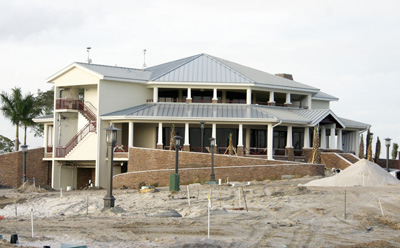 An opening date of Saturday, March 2 has been set for Royal Palm Beach Commons Park, according to Parks & Recreation Director Lou Recchio, who gave an update Monday to the Recreation Advisory Board.

“The phone never stops ringing with people asking when is it going to open, but I will say this: I have not received one negative comment,” Recchio said “You read in the media about delays and everything, but I have not received one negative comment from a resident. They know that we want to do it right. We’re not going to open it until it’s ready to be open, and we’re going to make sure that it’s 100 percent ready for the residents to come into the facility.”

Recchio described the plan for March 2 as a “soft opening” with a ribbon cutting. “There is no grand scheme of events,” Recchio said. “Once we have the ribbon cutting, you’ve all heard of the ‘Food Truck Invasion’ that has taken the state by storm. We will have them over at the park when we open up. We will have different inflatable-type rides or games for the kids.”

There will also be varieties of entertainment throughout the park, he said, explaining that there are numerous pavilions set up to accommodate small bands, a DJ or a single person playing.

“We’re looking at a saxophone player in the sporting center or a guitar player in the banquet garden,” he said. “The activities going on there will be nothing extravagant. It’s just to let the residents come in and see what we have to offer and let them know that it’s open.”

A grand opening is set for Friday through Sunday, March 22-24. “We’ll have our kayaks and canoes on board,” he said. “Hopefully, we’ll have our café open. We will have entertainment.”

On Friday, there will be a movie, The Amazing Spider Man. There will also be stage entertainment from local schools. Saturday will begin with a 5K run/walk for adults and children, which will take place entirely inside the park, he said. The food trucks will invade again in one of the parking lots. All weekend there will be a full carnival, with mechanical and inflatable rides.

“We will have entertainment every day — different tribute bands from the ’60s, ’70s and ’80s,” he said. “Then we’ll have some local acts, county acts, smaller entertainment in other areas.”

A beer garden and several tournaments are also planned before an evening fireworks display caps the Saturday festivities. On Sunday, the park will be open from 10 a.m. until 5 p.m., with more entertainment.

“We’re excited, and we’re going to try to invite some major corporate personalities to come out so they can see the venue, because I think we have a great opportunity to partner with some of these large corporations,” he said. “We’ve had sponsors in the neighborhood of $10,000 in the past, but we’re looking to go beyond that.”

For example, Recchio said he is looking for a major sponsor for such events as the Festival of Lights during the holidays and for a major concert series.

“It’s nothing that can’t be done, he said. “When you see the venue, this is not a community park. This is a regional park, and we want people to see it. Over the course of time, I think it will have a major influence on the village and local businesses, without a doubt.”

Recchio said many volunteers will be needed to help with the opening. “We’re going to be going to the schools and the different civic organizations.”

Recreation Advisory Board Chair Felicia Matula pointed out that high school students are required to put in a certain number of community service hours.

In other business, Recchio said the village has received its agreement with the county for the village to use and maintain athletic fields at Seminole Palms Park. “We have officially taken over that portion of the park,” he said. “We’ve been out there to see what needs to be done. We’ve got schedules with the various user groups. We’ve given them our rate schedules, and they understand. The county never charged for some of the groups. They are adapting to our fee structure, and it’s going to give us an opportunity to have some major athletic events with those four additional fields.”

The additional fields will allow the village to move its adult and youth flag football programs to Seminole Palms Park. Soccer will also now be at Seminole Palms. “That’s going to be a huge advantage,” Recchio said. “I think it will be very successful.”

ABOVE: The main building at the new Royal Palm Commons Park.